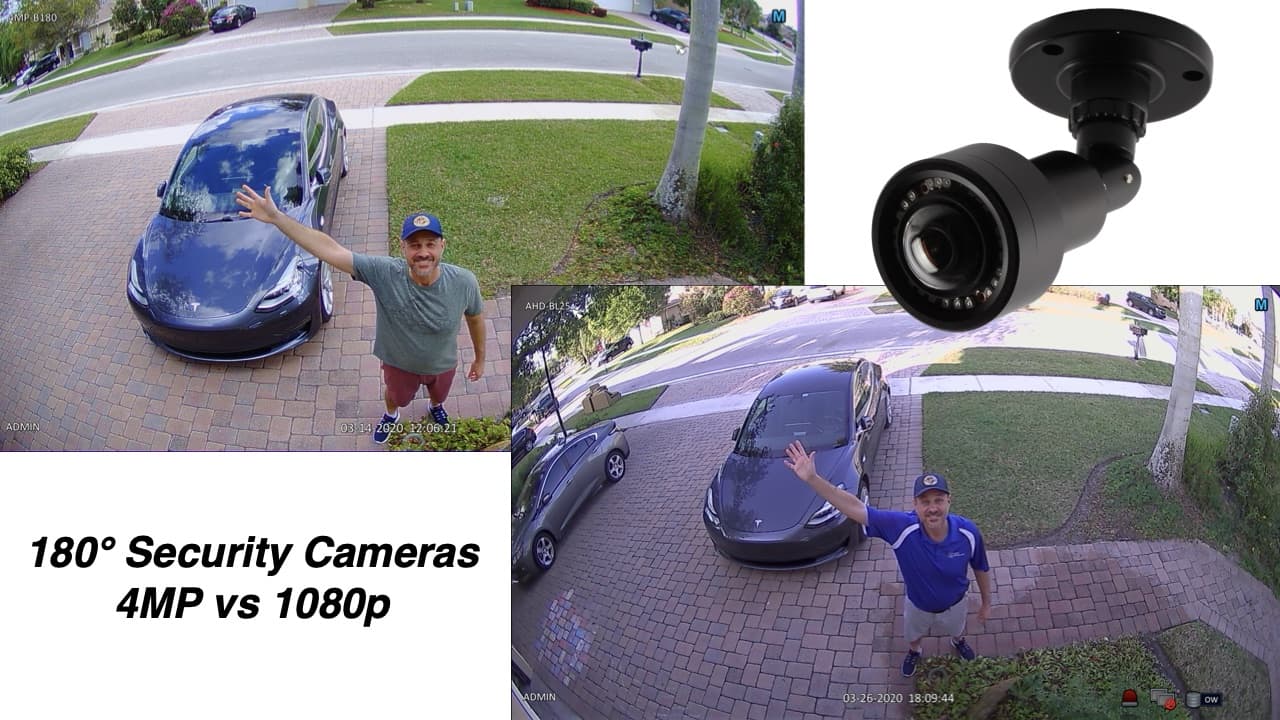 Watch this HD video to see a comparison of video surveillance footage recorded using two of our 180 security cameras (4MP vs 1080p). These are the two cameras that I used in the video. 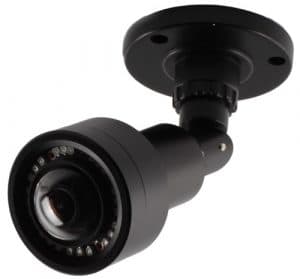 The two cameras look identical. The above image shows the bullet-style weatherproof housing that is used for both cameras. Both cameras also have the same IR night vision capability, ultra wide angle lens, and BNC video output. The only different is the resolution that they are capable of.

To run the comparison test, I used my home security camera system. 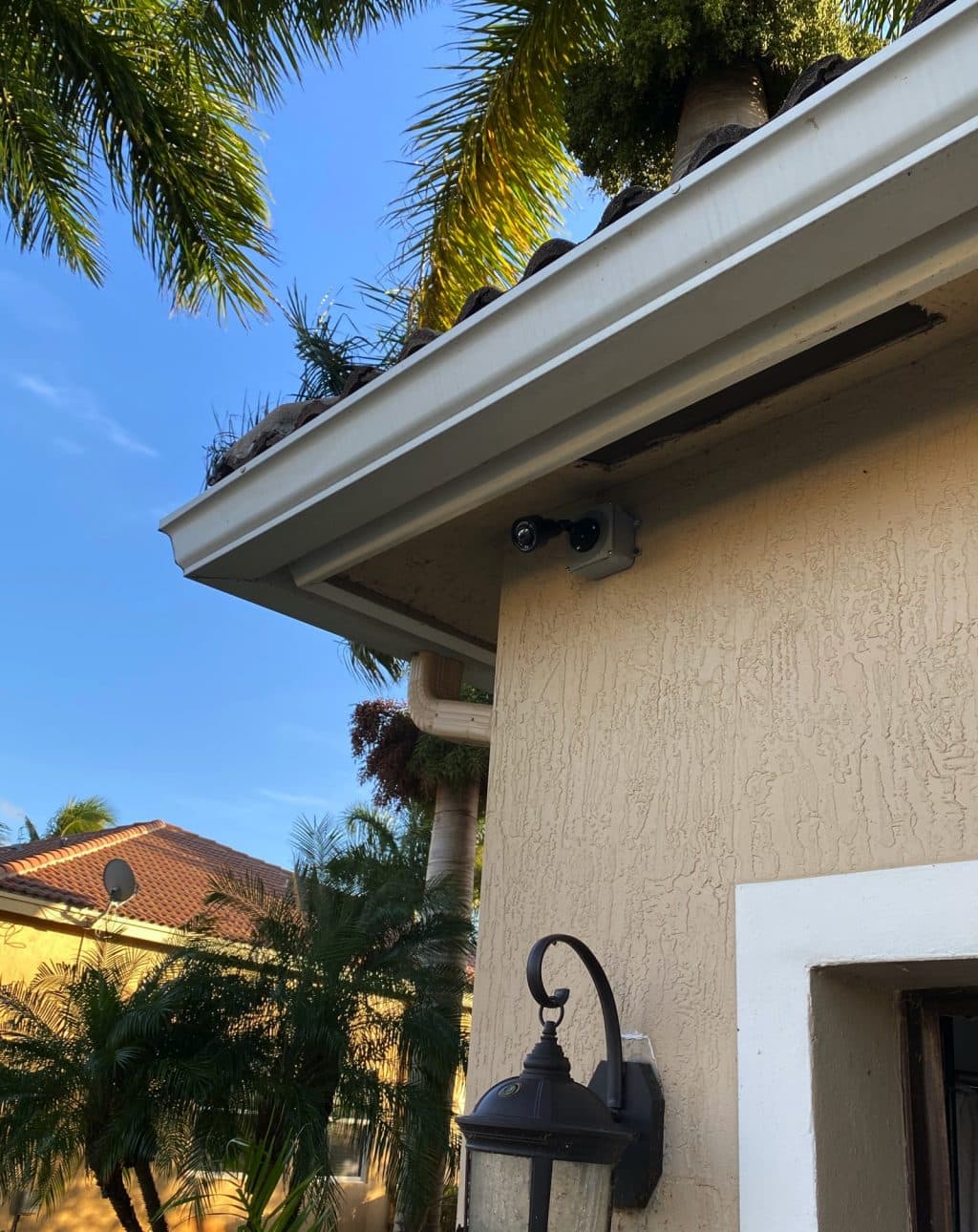 Here is outdoor installation of the 180 camera above the garage on my house. 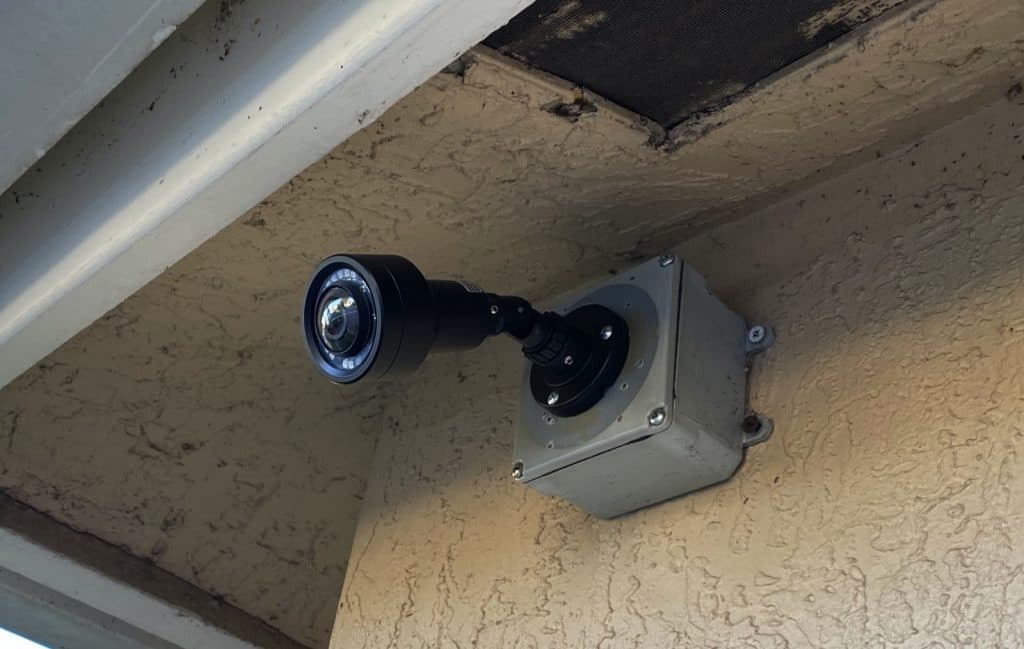 Here is a close-up of the installation. I used a plastic electrical junction box when I installed the original analog CCTV camera system at my house about 14 years ago. That is why the junction box has additional mounting holes and looks so rough.

This camera can also mount directly to a wall (without a junction box), but I recommend using one for outdoor installations. The install does not look as neat, but if you need to take the camera down for service or replacement, the J-box makes it much easier that dealing with the BNC connector going through the CBS wall. 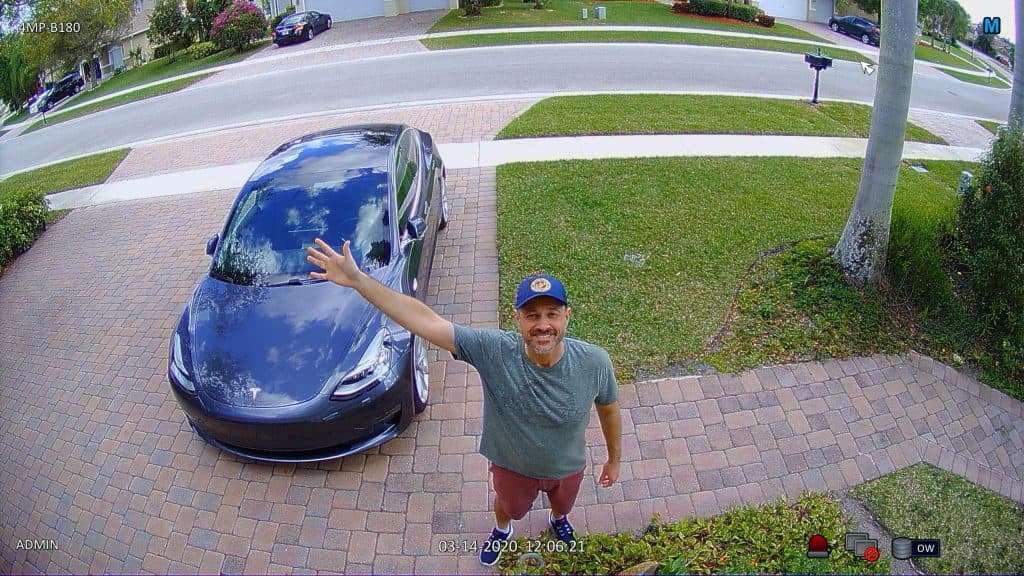 Here is a still snapshot that I pulled from the video recording of the 4MP camera. You can click on the image to see the full 4MP image. 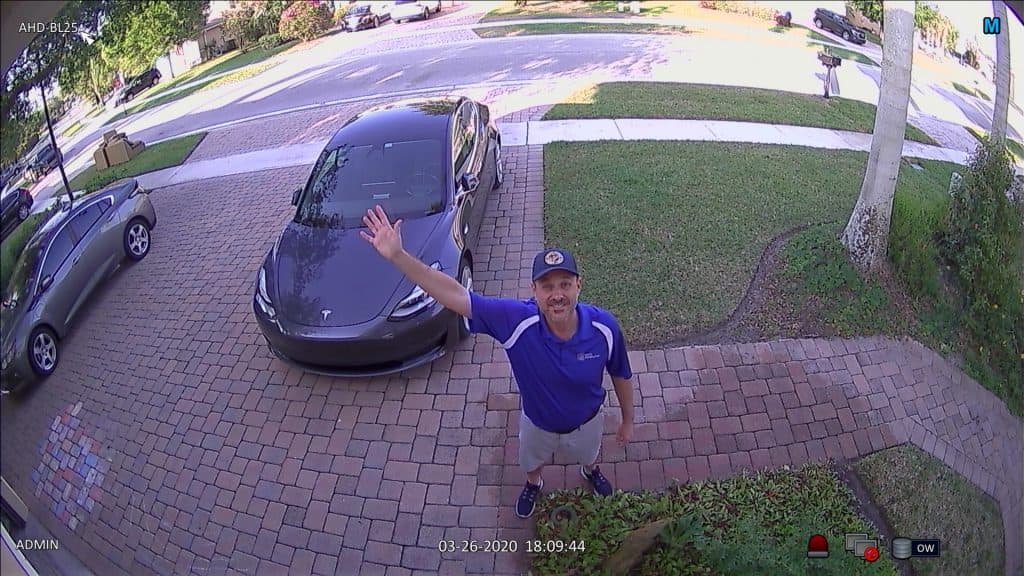 Here is a still snapshot that I pulled from the video recording of the 2MP / 1080p HD camera. You can click on the image to see the full 2 megapixel image. 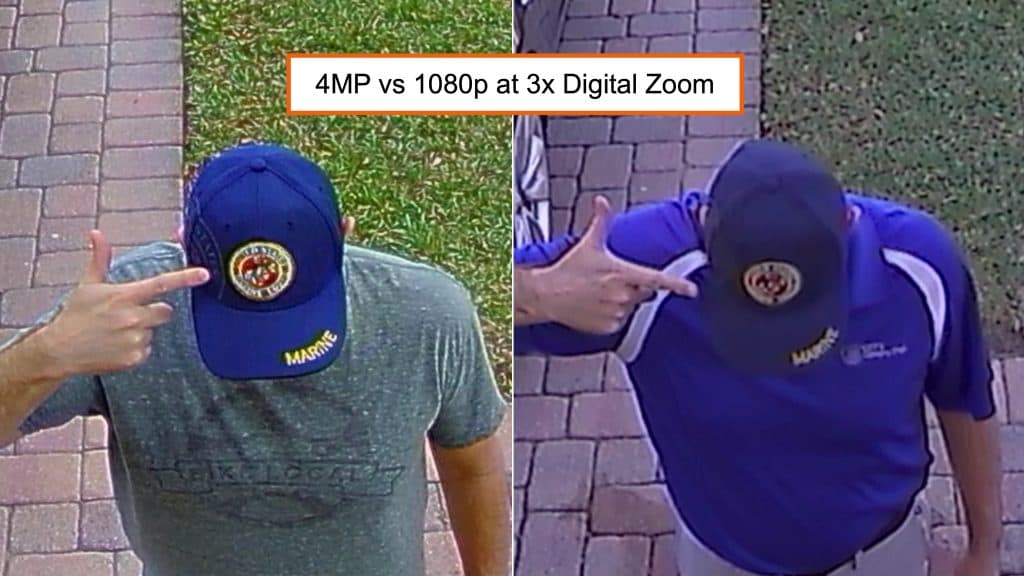 One of the benefits of higher resolution cameras, is that the image will be clearer if  you ever need to digitally zoom in. Take a look at the above photos that I captured from the recorded video surveillance footage. I digitally zoomed in to the images at 3x / 300%. You can see that the “Marine” text on my baseball hat is much clearer using the 4MP camera vs 1080p camera.

To record the video, I used the iDVR-PRO 4K surveillance DVR that I have installed at my house. Both cameras used the same RG59 Siamese coax cable that was already run from that junction box on my house, back to the DVR. One of the nice things about the new iDVR-PROs is they support almost all surveillance video formats and resolutions.

All BNC ports on these DVRs support all of these formats and resolutions. You can mix and match various types of CCTV cameras on the same DVR.

When these 180 cameras are connected to an iDVR-PRO, you can view the live video from your cameras from iPhone and Android mobile apps. In addition to the remote live view, these mobile apps also support search and playback of video surveillance footage recorded on the DVR’s hard drive. 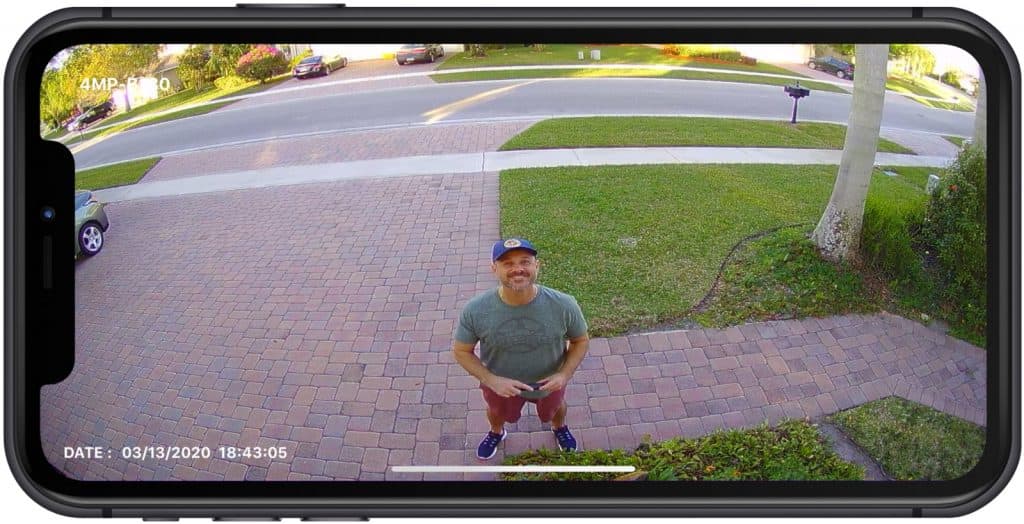 This is the live remote view of the 180 degree security camera from the iDVR-PRO iPhone app. Please note that we used the 4 megapixel mode for both of these images. However, from the mobile apps, there is no difference in video quality between the 4mp and 1080p. This is because the DVR does not stream, the full resolution of the cameras to the mobile apps. The resolution is scaled back to 720p or 1080p depending on the speed of your Internet connection. You can learn more about viewing security camera from this iPhone app here. 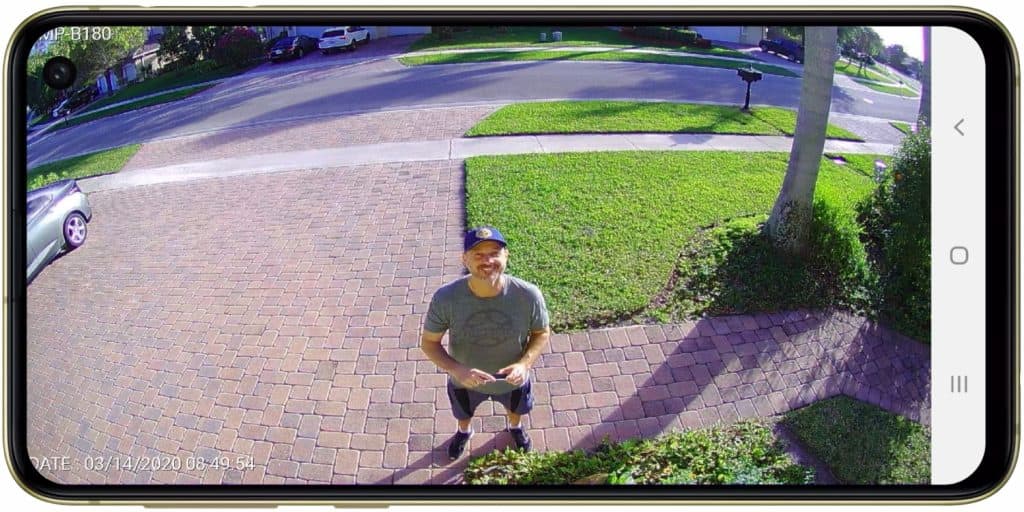 Here is the remote camera view from the Android mobile app. Again, we are using the 4mp model but it does not matter because the resolution was scaled down to 720 resolution for the mobile streaming. You can learn more about viewing security camera from this Android app here.

Click here to learn more about the 180 degree security cameras that I used in my testing. If you have any questions about this article or anything related to video surveillance systems, please email me here.