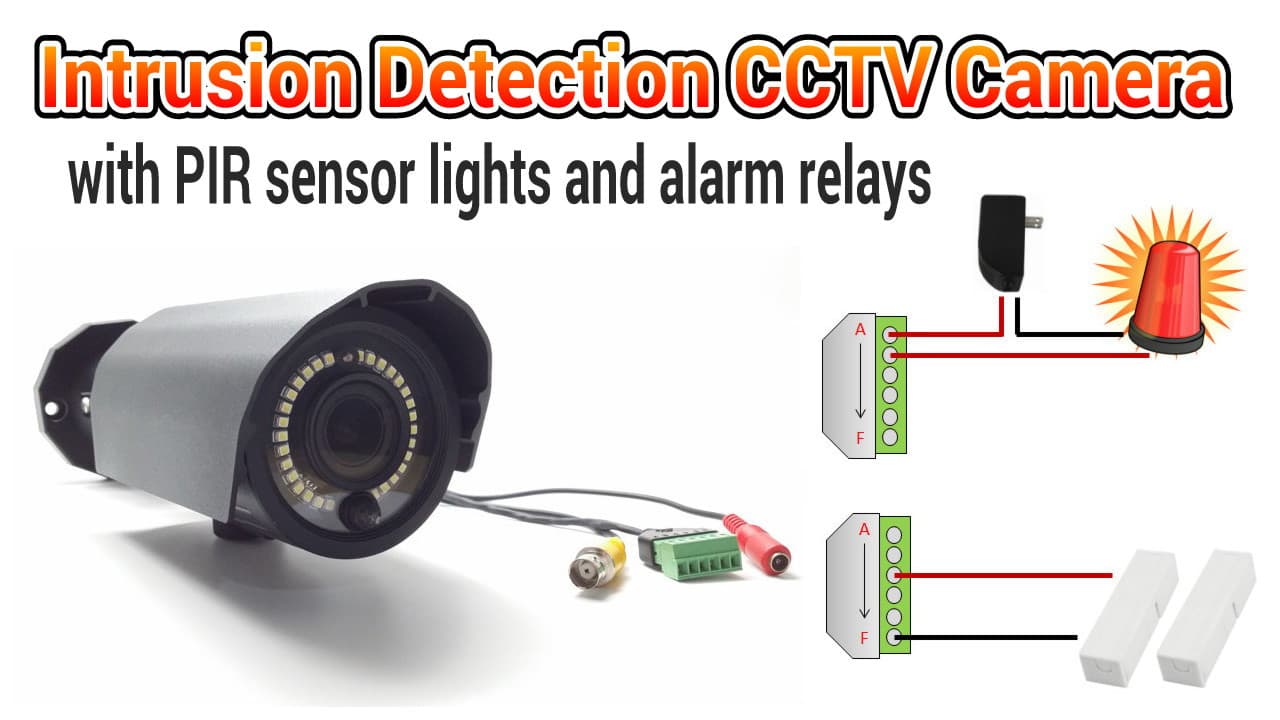 The PIR-BL7 is a CCTV camera with PIR motion detector lights and alarm relay input and outputs.

A few months ago, I began testing the PIR-BL7 CCTV camera. I am always excited to test out a new product that has some unique feature or ability that make it special. This camera has several features that make it very special. 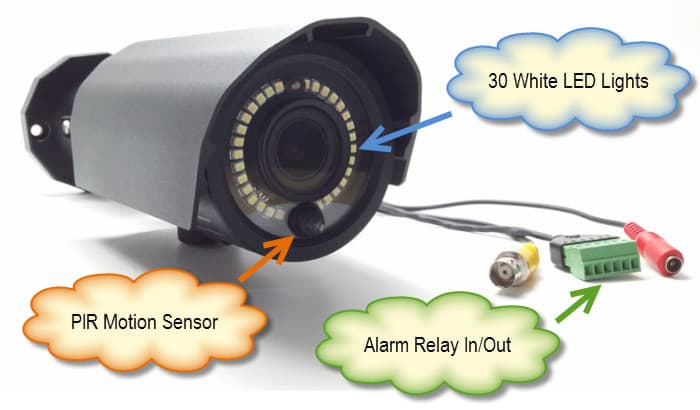 The PIR motion sensor is located on the front of the camera, just below the camera lens. This motion sensor is designed to detect movement of human sized objects when they come into view of the camera’s lens. The camera has a 2.8-12mm varifocal lens which when adjusted to the widest angle (the 2.8mm setting) the camera provides a 109 degree horizontal field of view. The PIR sensor detects motion across a 100 degree field of view. Please note that if you adjust the lens to a more narrow field of view, this does not effect the area where the PIR sensor will detect motion.

The 30 white LEDs on the front of the camera make up the “security light”. Instead of using infrared LEDs and capturing black and white video during night time operations, this security camera can always record in color. When in night mode, the white LEDs turn on when motion is detected by the PIR sensor. Being that the area is illuminated by the LEDs whenever there is movement, the camera always records in color.

When the LEDs are off, the camera uses Sense-up light intensifier technology which makes it able to capture color video even in very low light environments. Watch this video to see how well this camera works, even with the lights off. I use my iPhone to show just how dark the room is where I am testing. 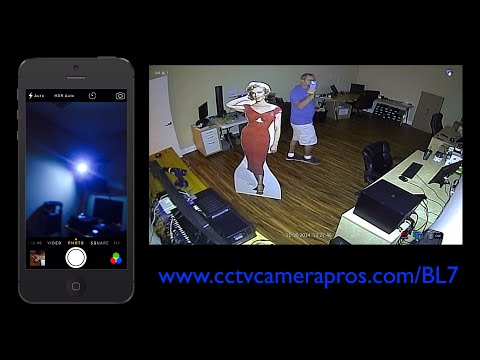 The PIR-BL7 would be a great camera if the motion detector lighting was the only special feature that it had, but the camera also has built in alarm relay inputs and outputs that make it a truly outstanding security camera in my opinion. Here is how the alarm inputs and outputs work.

In addition to the power and video lead, there is a third cable lead connected to the camera that contains a block of wire terminals. These give the installer access to the alarm relays. 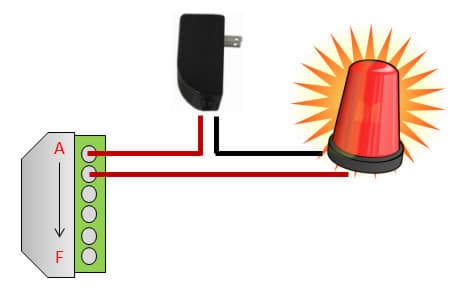 The alarm input can be used to connect sensors such as magnetic door sensors. When the door sensor is opened,  the alarm relay output and digital alarm output is triggered.

The digital alarm out is used to send a 5v DC signal to devices such as DVRs. You can see how this can be used to trigger alarm recording on a DVR here. 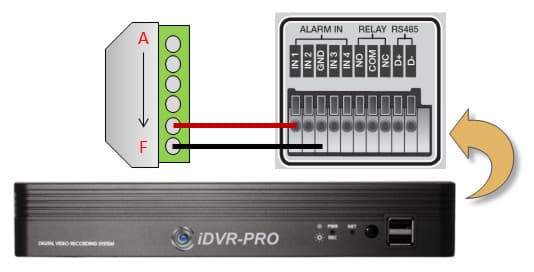 The digital output of the camera is triggered when either of these events occur: 1) The PIR sensor detects motion 2) The alarm relay input is activated.

Please note: although the PIR sensor only turns the LED lights on at night, it triggers the alarm relay output and digital alarm output in day and night.

I installed two PIR-BL7 cameras at my house a few months before we started selling them. I personally test all of the CCTV cameras that we supply and I like to leave them running in a real production environment to make sure that they perform well. When my testing is done, I take them down to make room for the next test. I ended up liking the PIR-BL7 so much that I am keeping the two that I tested at my house permanently as part of my personal home surveillance system.

Here is the one that I have mounted just above the garage door. I have the camera lens set to the widest position and it provides great coverage of the entire 3 car wide driveway. The streetlights provide enough lighting for this camera such that the LEDs are not even really needed for this area, but the 24/7 color video is so nice, I just left it there.

I have the other PIR-BL7 mounted at the front door entryway to my home. This is an area that does not get much light at all, especially being that the light at the entryway does not work. Unless there is moonlight, this location is pitch black. If anyone approaches the door after dark, the PIR sensor picks them up and the LEDs turn on before they get to the door. This illuminates the entire entryway very well.

Here is a video that I captured from the PIR-BL7 that is connected to my iDVR-PRO8A. I exported the video from the DVR and uploaded the MPEG4 video to YouTube. Please note that there is zero light in this entryway. That is why it is so dark before the LEDs turn on. Please also note that the video gets degraded slightly when re-encoded for YouTube.

If you would like more information and current pricing for the PIR-BL7, please visit this page.