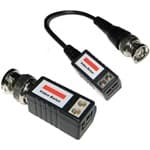 Video baluns, also known as CAT5 baluns, enable security installers to use CAT5 cable to run video (and optionally power) for CCTV cameras.  A video balun is placed on both ends of the CAT5 cable run and uses one of the the twisted pairs from the CAT5 cable to transmit the video from the camera to a DVR or monitor.  There are also multi-camera baluns that can use the four twisted pairs in CAT5 to transmit the video for up to four cameras.   Most security camera installers are familiar with using RG59 Siamese coax cable for CCTV, as this is the industry standard cable and allows installers to run both the video from the camera and power to the camera using a single cable run.   There are versions of video baluns that also support running power to CCTV cameras in addition to the video.  These are some of the most common reasons that a security installer would choose to use CAT-5 cable instead of RG59 for a CCTV application.

The following types of video baluns are available and used in different circumstances.  Please note that you can click here to shop for the different types of CCTV video baluns discussed in this article.

Passive video baluns are not powered and support cable distances up to 1200 feet.  These baluns use only one of the twisted pairs in the Cat5 cable.  The CAT5 is attached to the baluns on both end using screw terminals or other connection types. The balun has a BNC connector that gets connected to the camera on one end and a DVR or monitor on the other. Please see the below wiring diagram, which illustrates this.

Video baluns with power support running low voltage power to CCTV cameras in addition to transmitting the video signal.  For baluns that also supply power to cameras, one of the twisted pairs from the CAT5 cable is used for video and 2 pairs are used for power.  Installers attach one pair for the positive and one pair for the negative power leads.  There are also video + power baluns that use RJ-45 connectors instead of the cable terminals, and even some models that support audio as well.  Some installers prefer this, especially when using pre-made network cables with the RJ-45 ends already attached.  An important note is that the distance that power is unable to be run is much lower than video and is still limited by the voltage and gauge of cable being used. 12V DC typically begins to drop after 200 feet. The below video demonstrates how to use passive video baluns with power.

Click here for more information and pricing on these video and power baluns.

Active video baluns include a power supply and act also as an amplifier so that cable distances can be increased beyond 1200 feet (the limit for passive baluns).  An active balun receiver can be used on the DVR or monitor end of the cable with a passive balun on the camera end to boost the maximum effective distance to 2000 feet.  When an active transmitter balun and active receiver balun are used together, the effective distance of the cable increases to 4000 feet for color cameras and 5000 feet for black and white. The below diagram illustrates the wiring used when installing active video baluns. Please note that power is required for both the transmitting and receiving unit.

Multi-camera video baluns allow each twisted pair of a CAT5 to be used for one camera, effectively allowing an installer to run video for up to four CCTV cameras over a single CAT5.  The below diagram illustrates how a multiple camera video balun is wired. 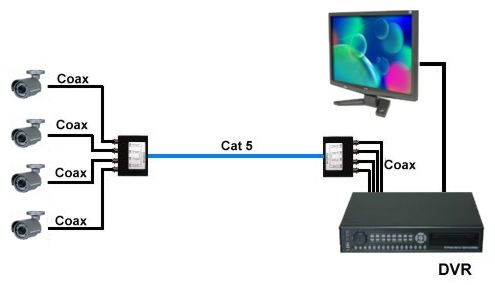