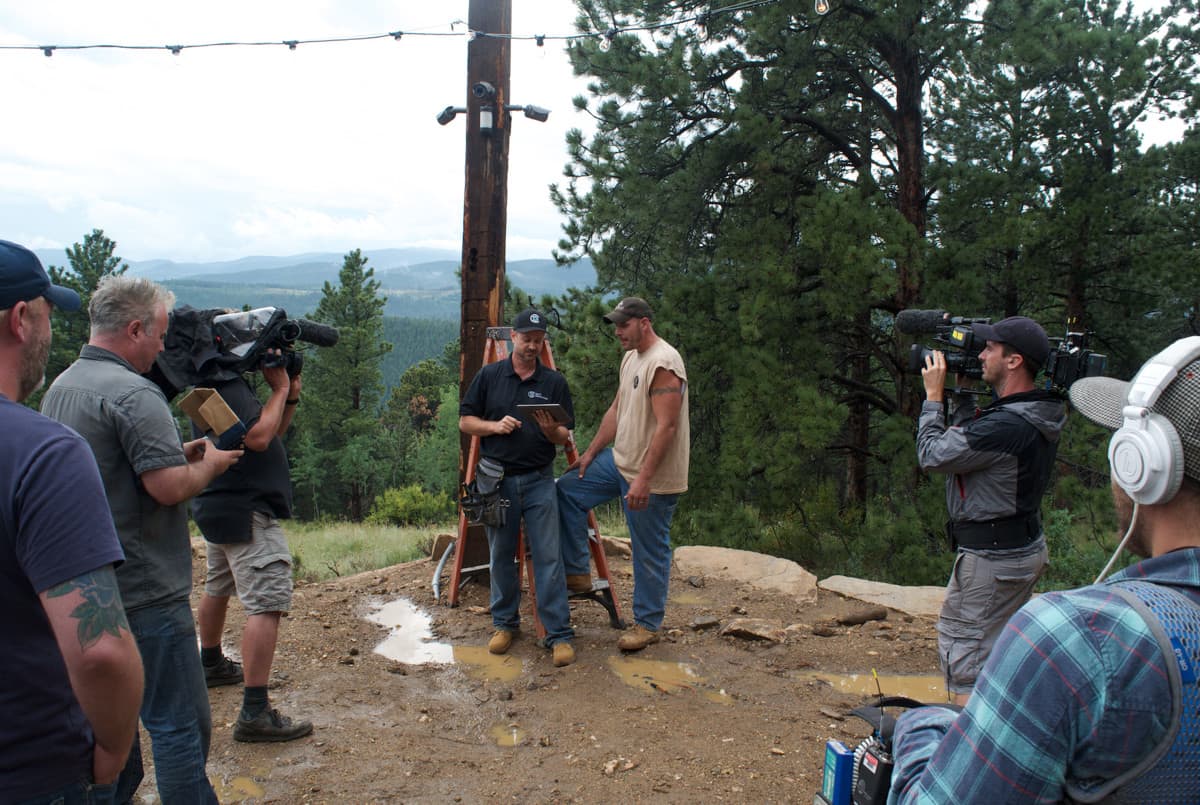 Mike Haldas from CCTV Camera Pros recently appeared on Animal Planet TV show – Restoration Wild. CCTV Camera Pros supplied and installed a high definition security camera system on a bus for episode 3 of the show which took place in Nederland, Colorado. This episode featured the build out of a 1940 commercial bus that is transformed into the ultimate mountain hangout. In the above photo, Mike is being filmed while showing the Restoration Wild project foreman, Mark, how to view the security cameras using the iOS app on iPad.

You can see 3 of the security cameras and one of the PIR motion detectors mounted on the wooden post above Mike and Mark. Another motion sensor is mounted on the opposite side of the post facing outwards towards the mountains.

The purpose of the video surveillance system that we supplied is to: 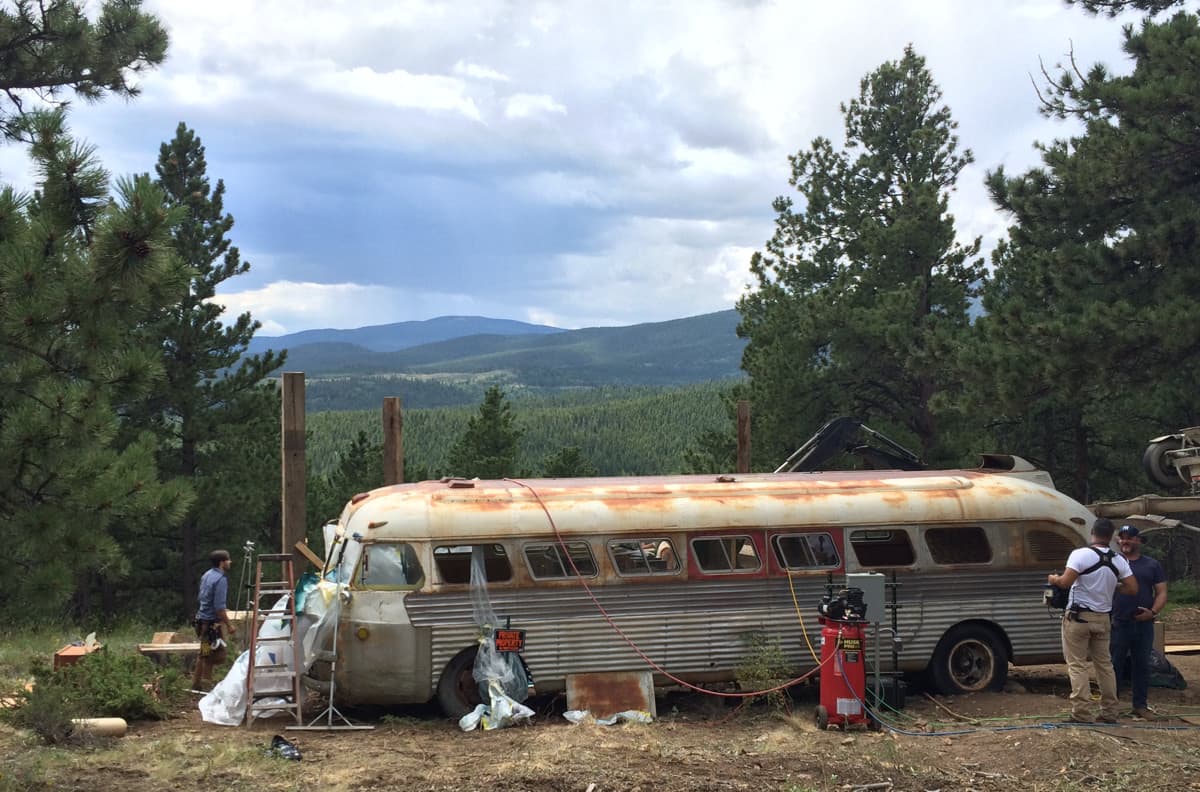 Here is a picture of the bus towards the beginning of the build-out. What an amazing view of the continental divide in Nederland, Colorado. 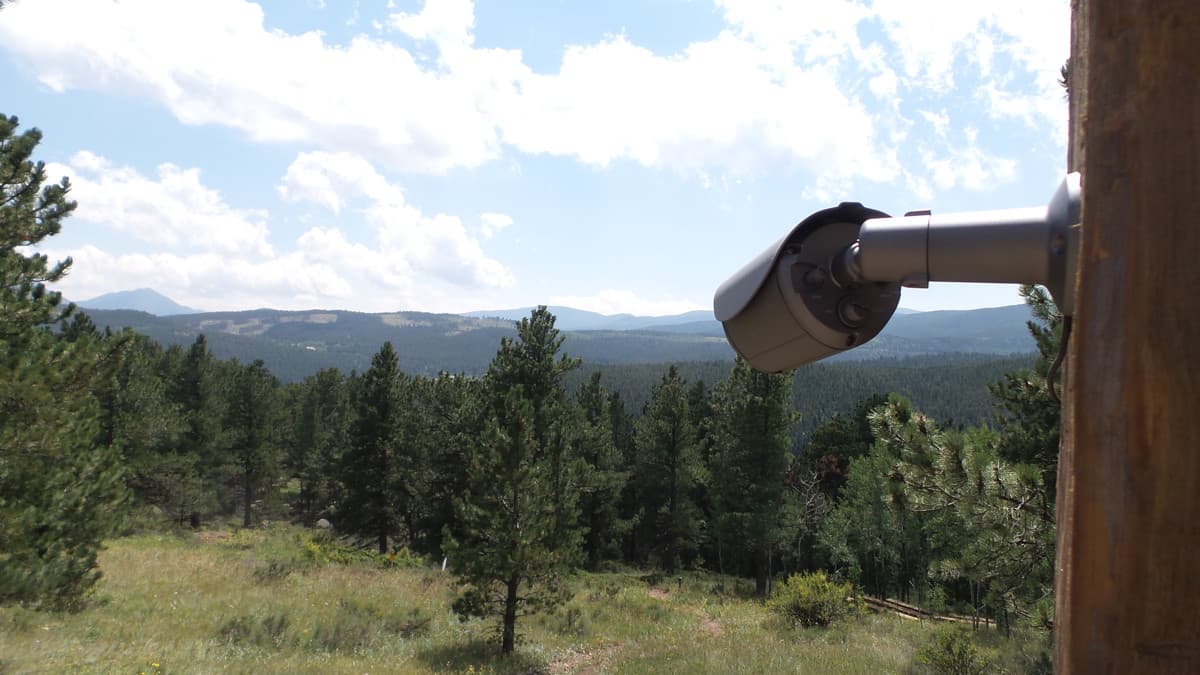 Here is the view that the outward facing camera monitors. We were hoping to capture video of wild animals while we were there doing the build-out, but unfortunately none came around – probably because of all the construction. This camera will also provide a nice view of that trail and the mountains in the background whenever the owners want to login remotely and see their property. There is an outdoor motion detector mounted facing outward also so that if any animals enter this area of view, an alarm will be triggered on the DVR so that the owners can easily go back and view footage whenever motion was detected. Later, when Internet access is available on this site, the owners can also get an alert when motion is detected. 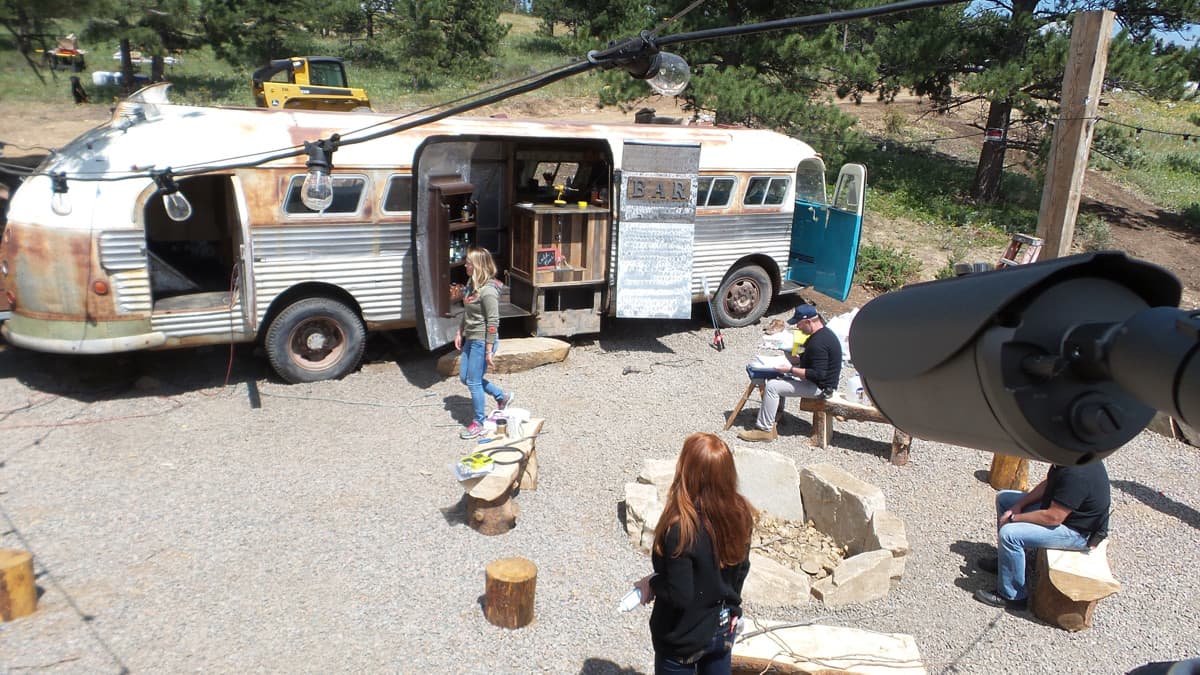 Here is the view that the bus camera monitors. Both bus entrances and the rear storage door are all within the view of this camera. The motion detector that faces this direction will detect animals and humans that enter this area. This serves the dual purpose of providing security and a wildlife camera. 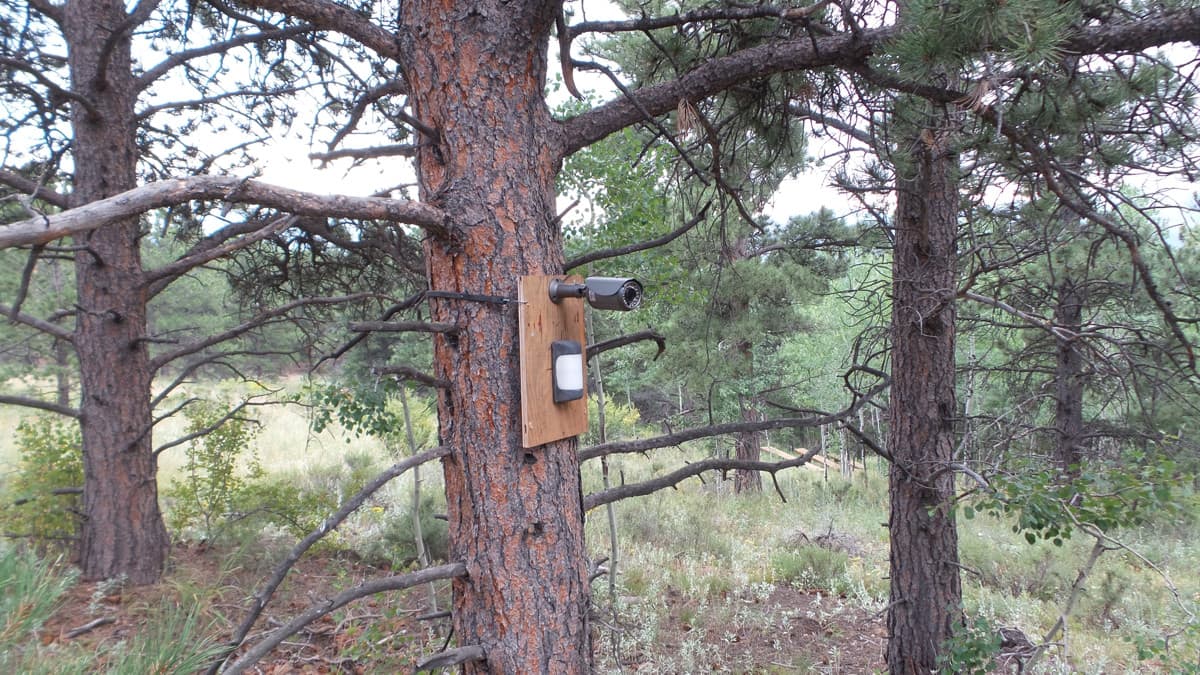 Jay Chaikin, the host of the show, noticed some animal scat about 400 feet away from the bus and had the idea of placing a remote camera to monitor that area. Mike mounted a camera and motion detector to a piece of plywood and strapped in to this tree. We called it the Scat Cam. This HD CCTV camera and motion detector were hard wired back to the DVR on the bus using RG59 coax cable and CAT-5. When filming was finished, Mike took this camera down but left the camera and PIR sensor mounted to the board – along with the cable, so that the owners can strap it to a different tree and move it around if they want to monitor other areas for animals. 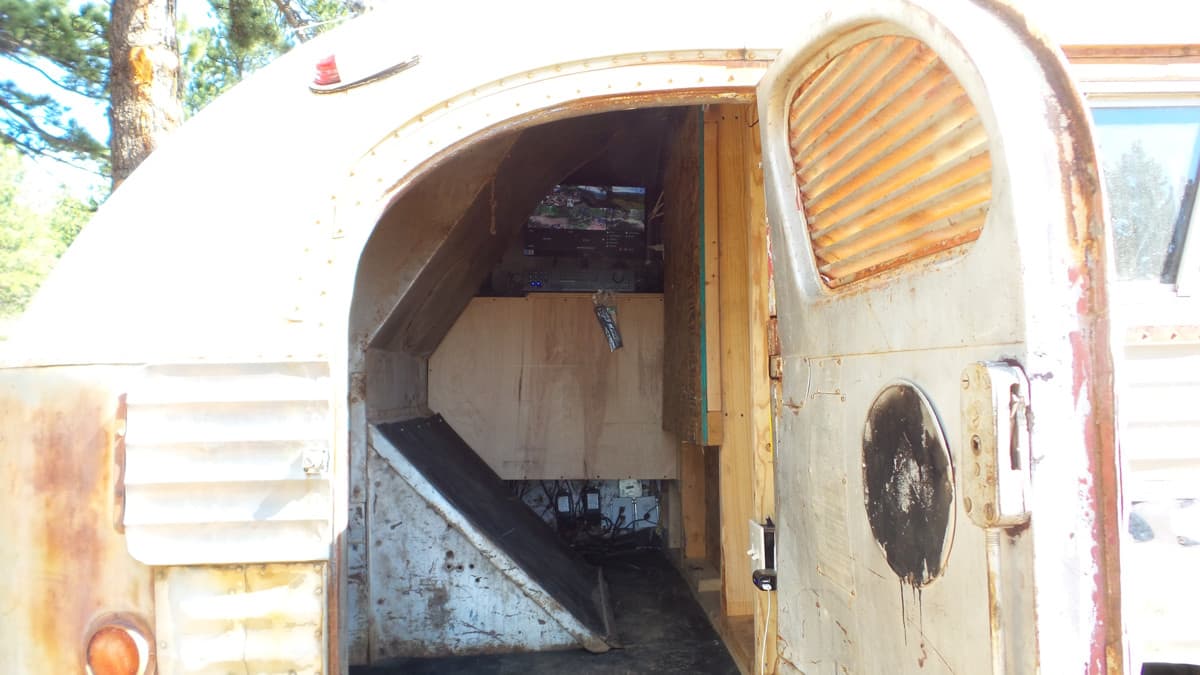 Here is where the DVR and monitor were stored. There is also a wireless router next to the DVR. Unfortunately, the Internet connection was not yet available at the site so the cameras could only be accessed on location. When the owners have Internet installed, they will be able to login and view their cameras remotely. They will also be able to play back video footage recorded to the DVR using the remote apps for iOS, Android, Windows, and Mac. 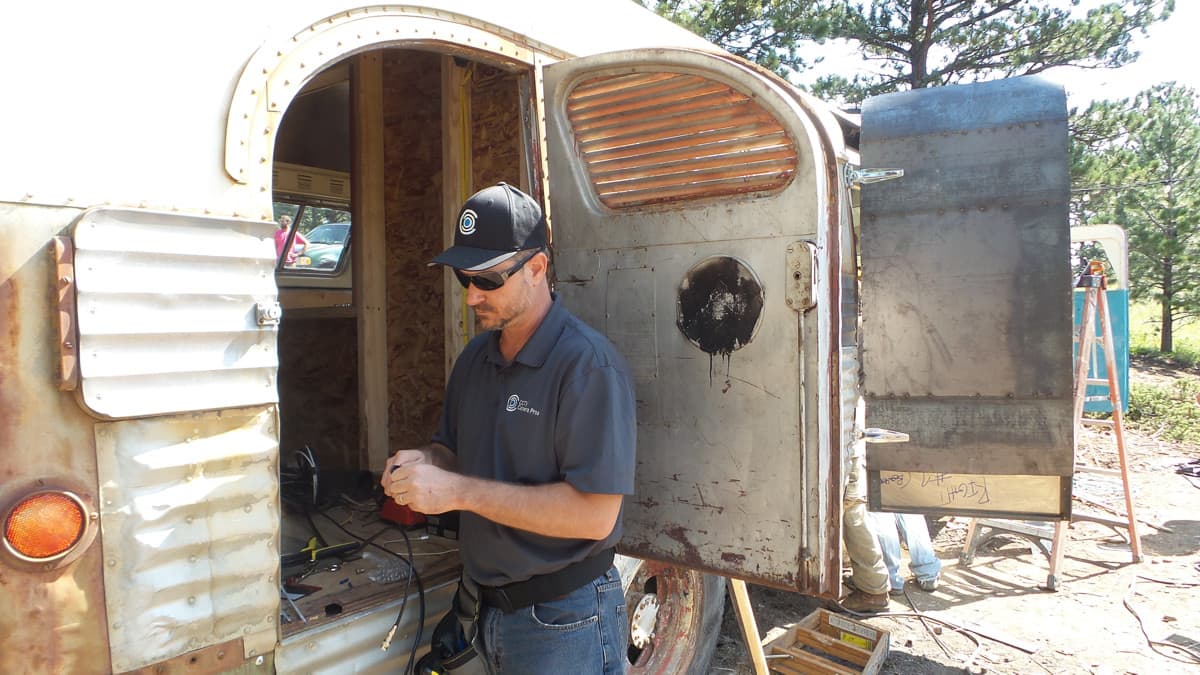 Here is Mike wiring up the cameras to the DVR. 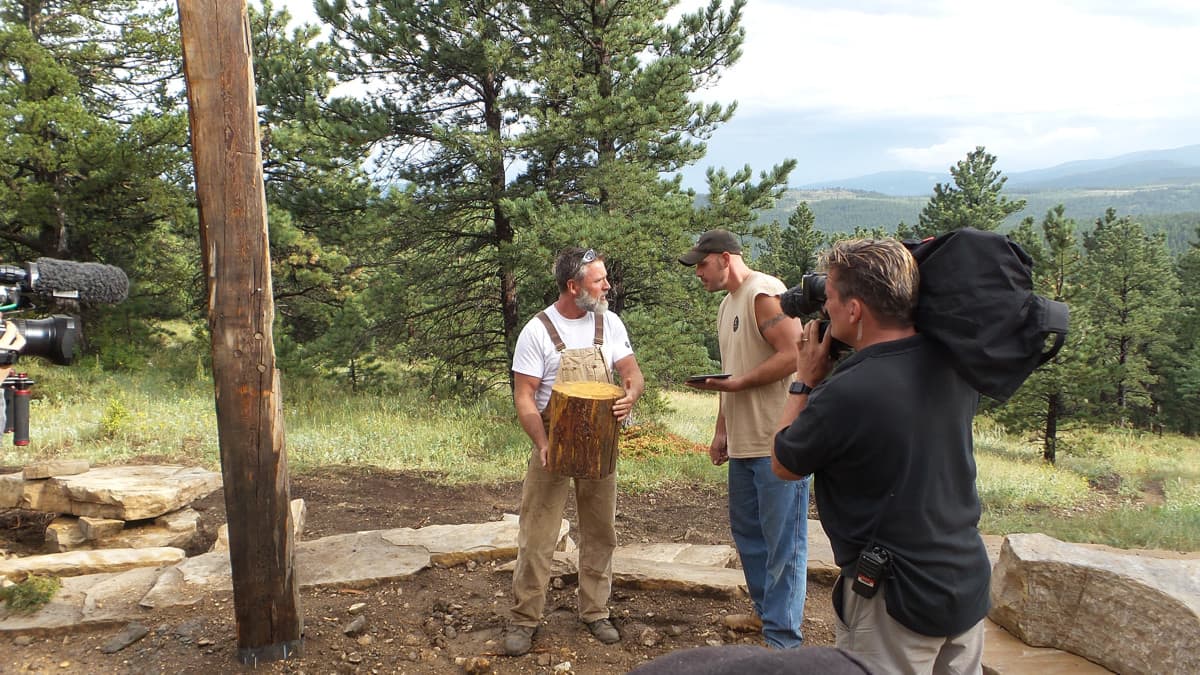 Here is a shot of Mark showing Jay Chaikin how to view the cameras on iPad. Jay is holding one of the logs that were used as seats around the fire pit. 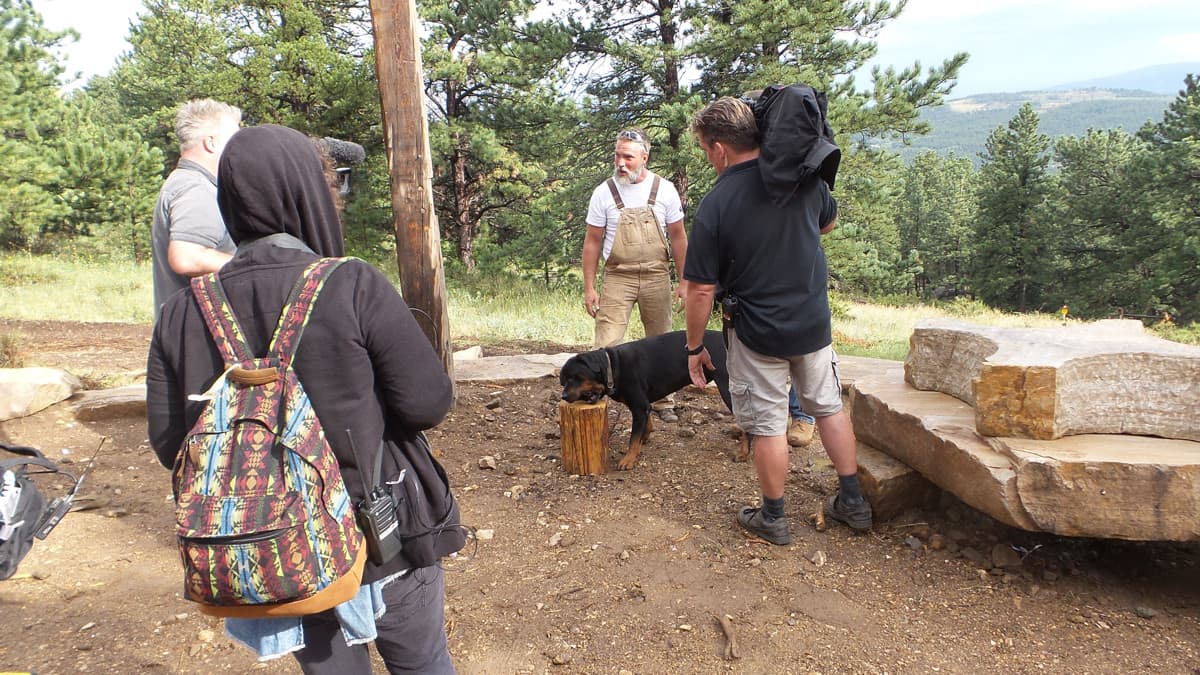 It was really funny when Jay put down the log while shooting this scene. The owners rottweiler came barreling through, picked it up, and starting gnawing on it while playfully growling. So funny! 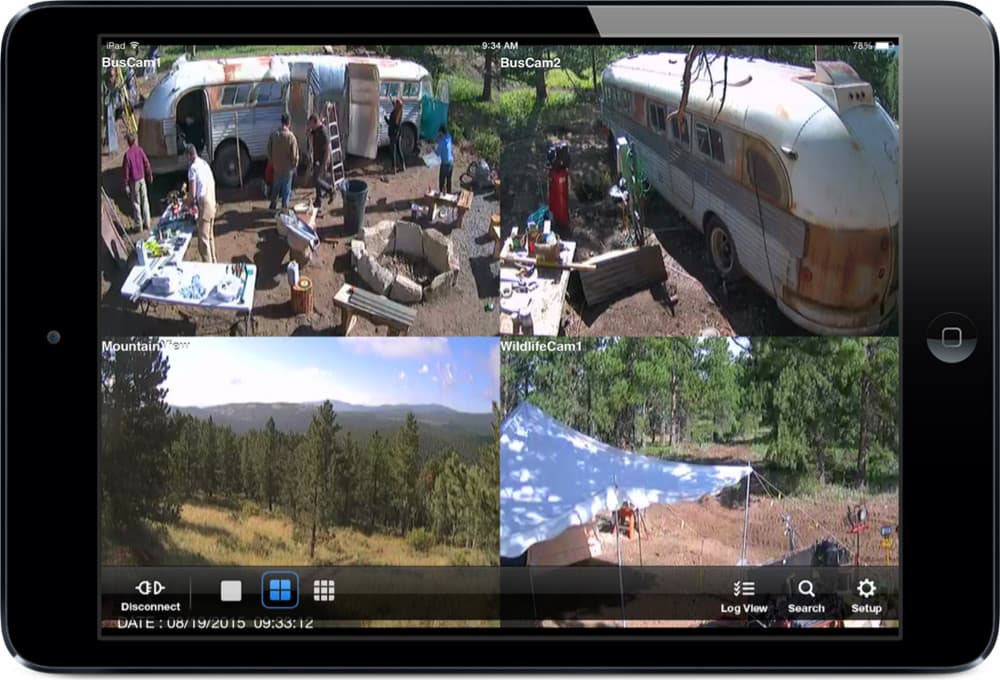 Here is what cameras 1 through 4 look like when viewed using the iOS security camera app on iPad. Obviously, this was before the build-out was complete. You can see a lot of construction still going on.

Here is how this works. The cameras are hard wired back to an iDVR-PRO16M high definition CCTV DVR using RG59 Siamese coax cable. The DVR is connected to a wireless router using CAT-5 cable. The iPad connects to the local network (LAN) via WIFI. The iDVR-PRO Viewer app is configured to connect to the DVR using an IP address, login ID, and password. The app allows the owners to view their cameras live and also play back recorded video. 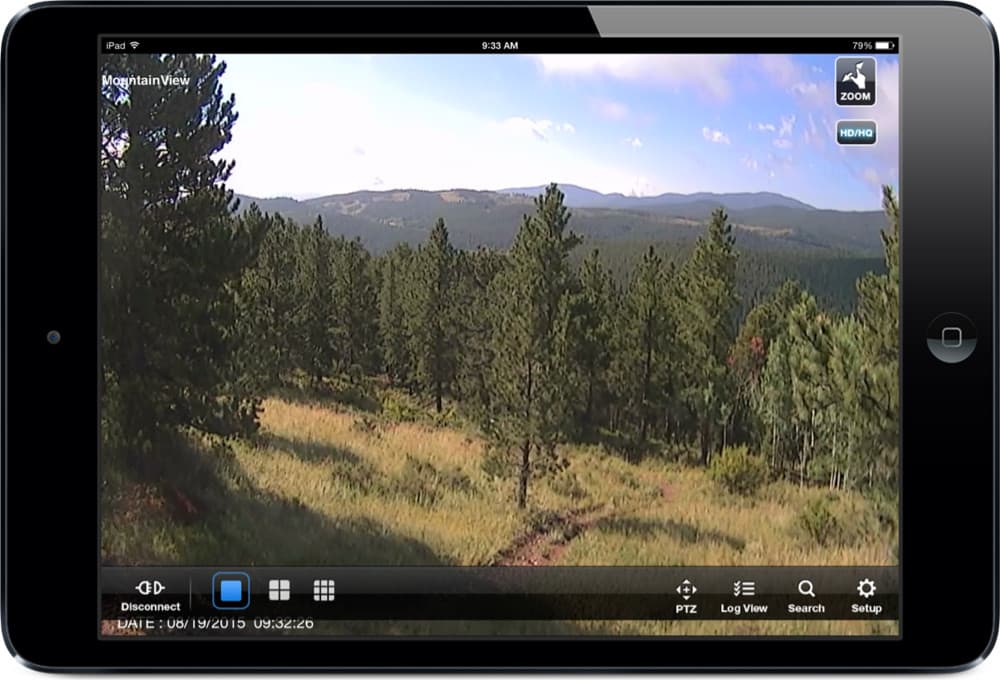 Here is the full screen view of the mountain camera. 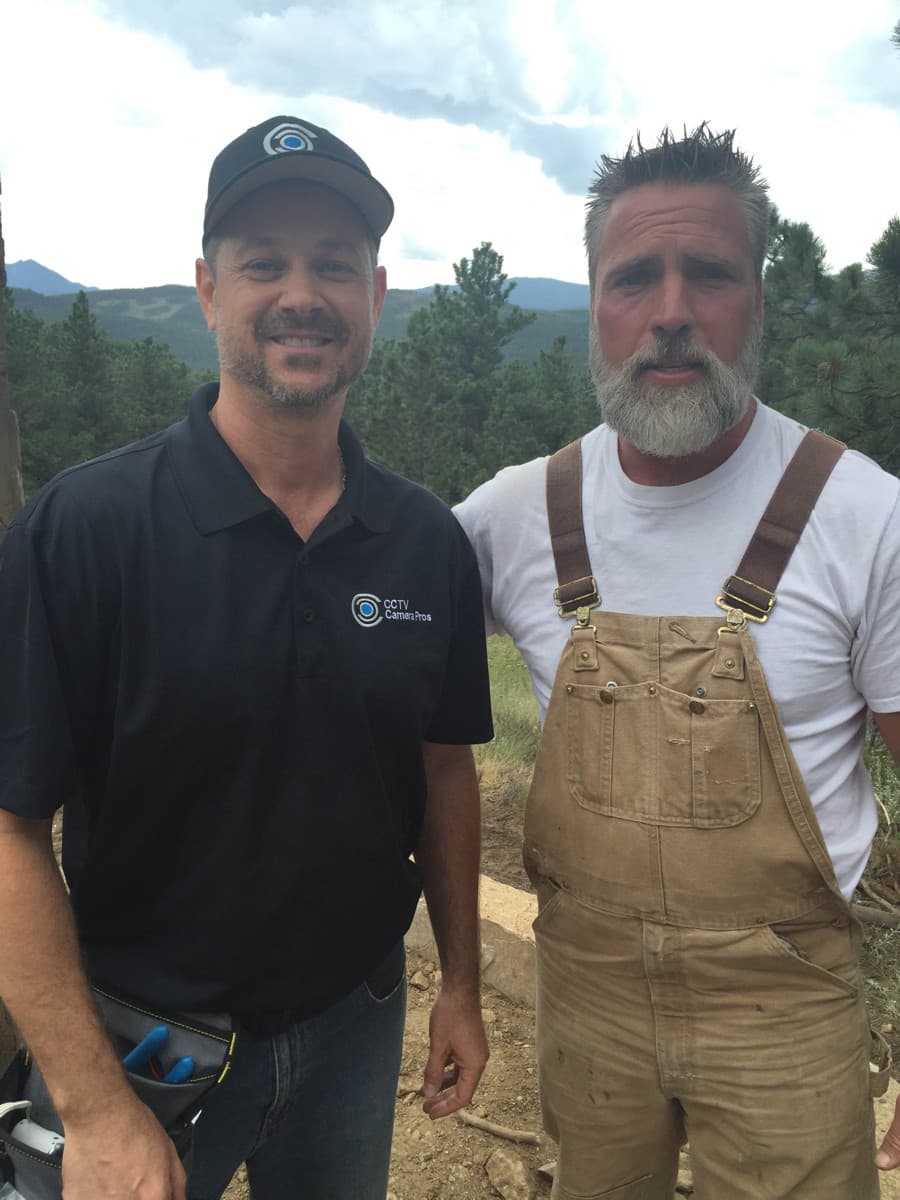 I had an amazing time in Nederland. Jay and the team at JC Woodworking do amazing work and they are all a great bunch of guys. The same goes for the entire Animal Planet team. I am so grateful for the opportunity to participate in the project and get to know all of them.