Here is a Raspberry Pi project that uses the Tesla API and an outdoor motion sensor to create a security system alarm using my Tesla Model 3’s headlights and horn.

My Model 3 Tesla was delivered to me three weeks ago. Being a big software geek, one of the features that I have been obsessing over is the developer API / SDK (software development kit). After tinkering with some of the API commands to get familiar with how it worked, I decided to create a security alarm application. 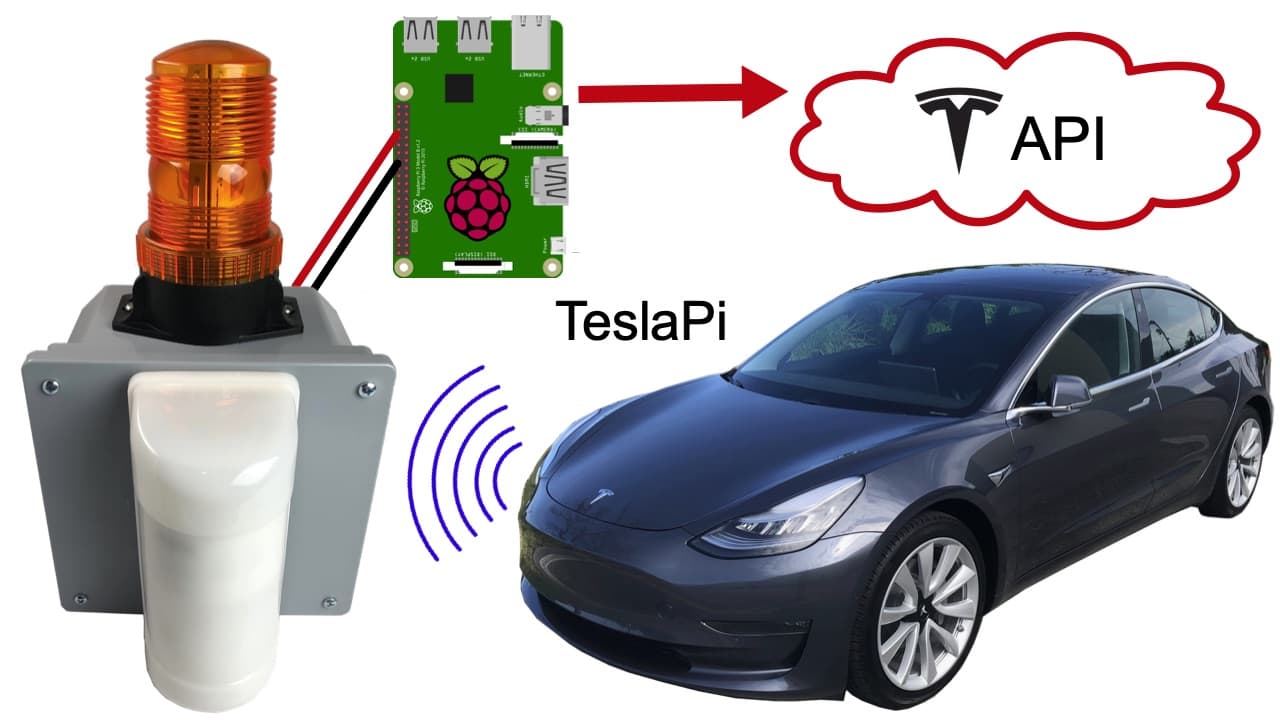 Watch this YouTube video demo to see the TeslaPi project in action.

The logical operation of the application is a bit more involved than just turning the horn and headlights on and off based on motion. I use the concept of an “alarm cycle” to escalate alarm levels based on how long the alarm has been active. Users can also setup a time range for monitoring using begin and end variables. For example, if you only want to enable monitoring from 12:00 midnight to 5:00 am.

Here is a detailed explanation of how it works. 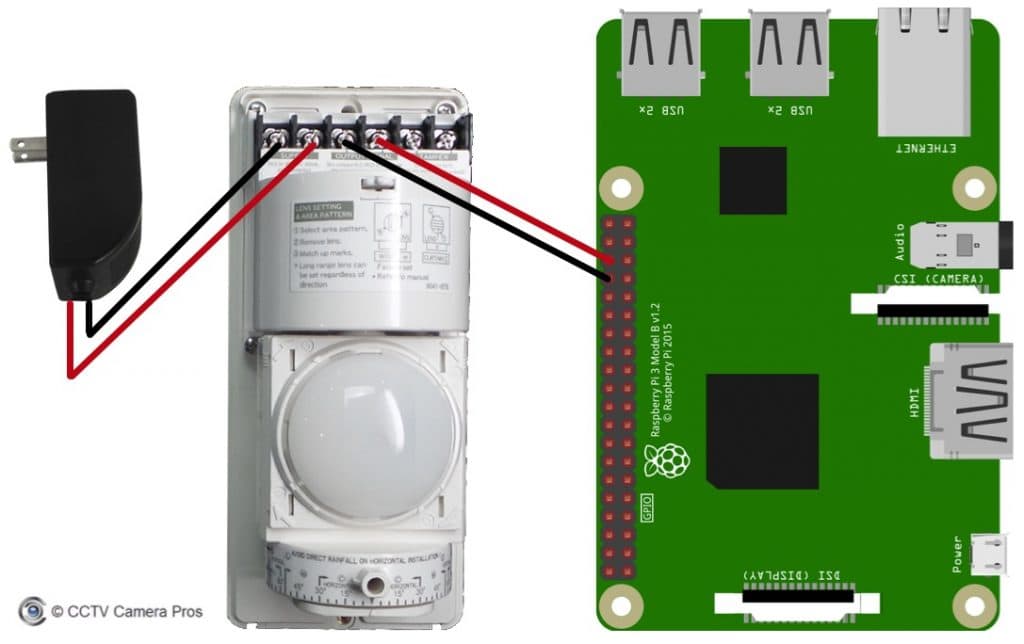 The Raspberry Pi wiring is simple. This is the outdoor motion sensor that we used. It comes with a 12V DC power supply. The output terminals are connected to GPOI pin 16 and the ground pin right next to it. You can use any GPIO pin that you want and just change the pin number in the TeslaPi.py application.

The Rapsberry Pi must also be connected to the Internet in order to communicate with the Tesla API.

The Python source code for the TeslaPi project is hosted on Github. You can download it from that page and find detailed setup instruction on how it is installed. 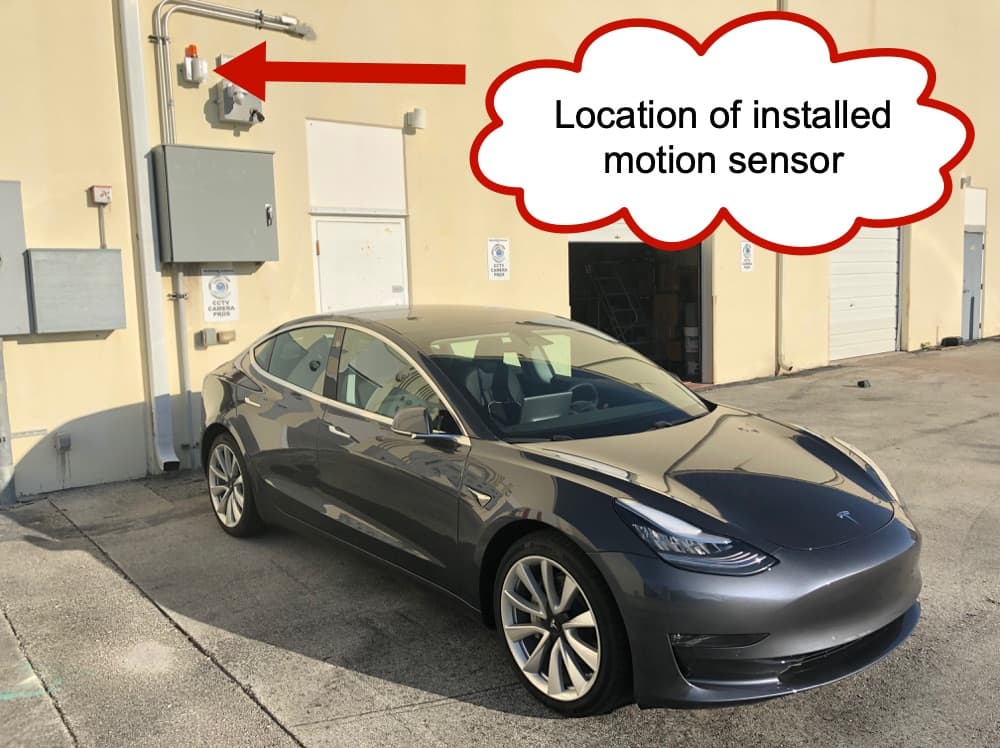 After I finished coding and testing this project, Carlos installed a motion sensor outside where I park so that we can test further in a real environment. Our trash dumpster is located near this location and we have a lot of illegal dumping at night. We plan on using the strobe light on top of the junction box as a deterrent. 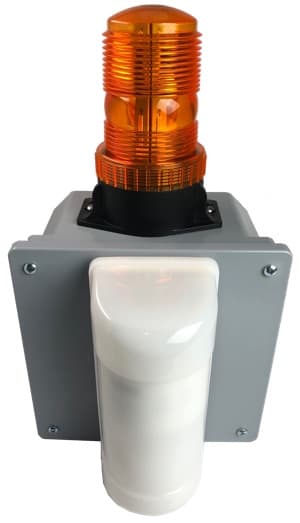 I already integrated with the strobe light that is on top of the junction box (in the above picture). I will document how to use connect a relay to the RaspBerry Pi and alarm devices soon.

I hope that Tesla enables API access to start and stop the video recording on the dash camera, rear camera, and side cameras. It would be nice to be able to trigger video recording from external sensors using the API. It would be really nice for Tesla owners to be able to back their cars into their driveway so that integration with their security alarm system could trigger video surveillance recording any of their Tesla’s cameras. It also would be nice is Tesla would enable the ability to keep the headlights on continuously from the API instead of just flashing. If that was available, the Tesla headlights could act similar to security floodlights in the front of a house.

I would like to implement a GPS location check in TeslaPi. The idea is to only use my car as an alarm output if it is on-site at the location of the motion sensor. I have already started this, but am not 100% done. You can see the gps.py script on GitHub as part of the TeslaPi project.

Use at your own risk

Please note that I created this Raspberry Pi / Tesla API project for fun. I wrote it very quickly and it is meant to be a proof of concept and a fun project to get familiar with the Tesla API. If you are going to use any of it in a production alarm system, you are doing so at your own risk and you should have a professional software developer thoroughly test it for your needs.

This software is provided as-is. This software is not supported by or endorsed by Tesla Inc. Tesla Inc. does not publicly support the underlying JSON API, so this software may stop working at any time. The author makes no guarantee to release an updated version to fix any incompatibilities.

The best place to make comments or ask questions about this project is on the YouTube video page.