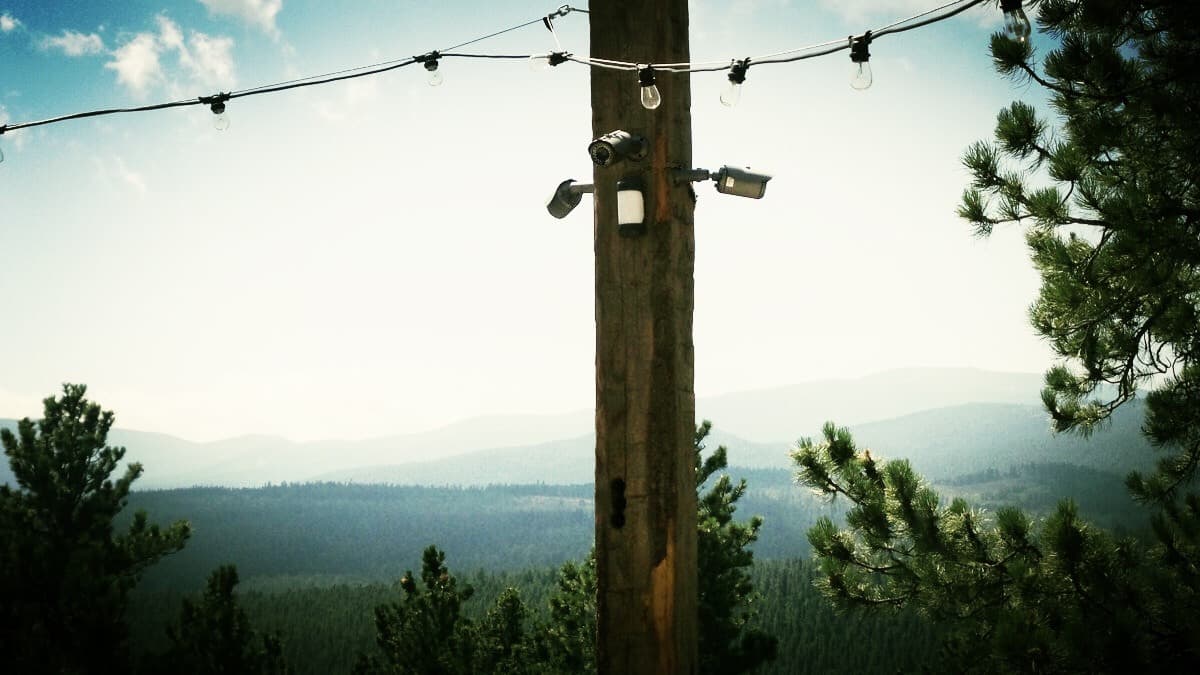 Working at CCTV Camera Pros, I recently had the opportunity to install a video surveillance system with outdoor PIR motion sensors integrated to trigger motion detection recording on the DVR. The project took place in a town called Nederland that is near Boulder, Colorado. The goal of the project was to provide security using a high definition CCTV Camera system to a 1941 bus. The bus was permanently parked on a 1.25 acre mountain lot and it was in the process of being fixed up to be a party / hangout place for the owners of the property. Check out the view of the Colorado mountains and forest.

The surveillance system that I installed consisted of six HD CCTV cameras, an HD surveillance DVR, and three outdoor motion detectors. Three of the security cameras and two motion sensors were mounted to the wood pole in the picture above. The second motion sensor can not be seen in this picture because it is on the opposite side of the pole (facing the mountains). 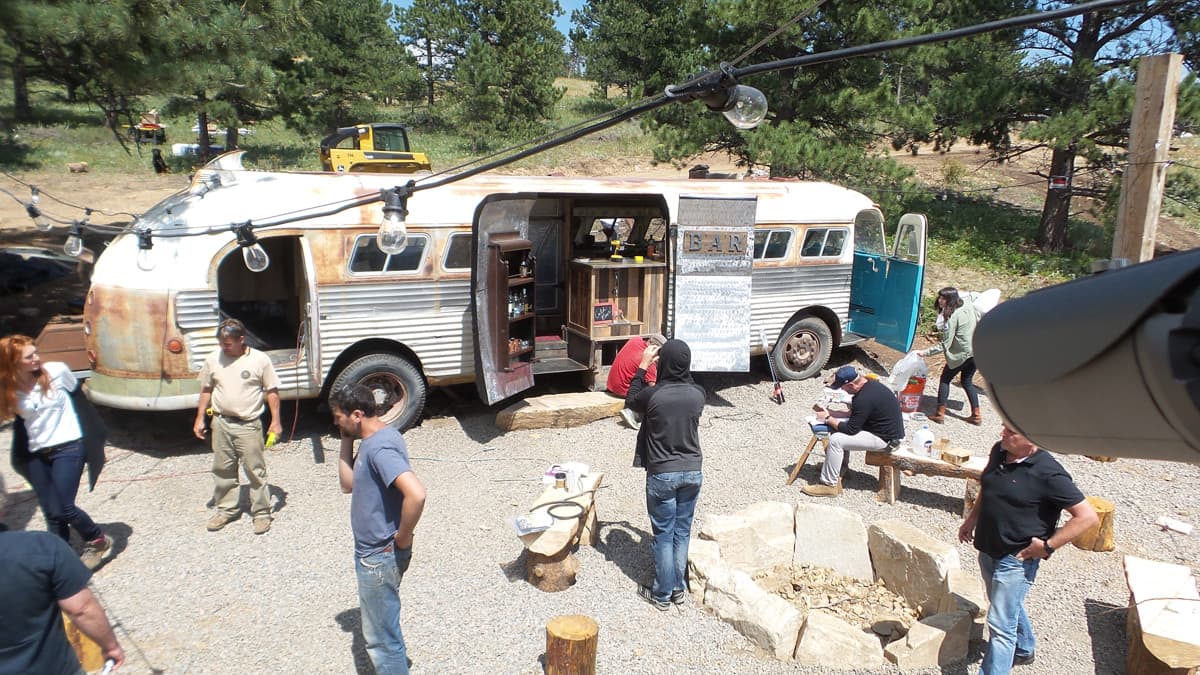 The CCTV camera and PIR sensor that face the bus were put in place to provide security. This is the view from the bus camera’s perspective. This camera monitors all of the entrances to the bus and the motion detector provides coverage of this entire area. The sensor provides 180 degree coverage up to about 35 feet in front of it.

The other motion sensor and two cameras that are facing outward towards the mountains are mainly for wildlife and mountain viewing. The sensor will also detect movement from people, so these cameras also provide security for the area. I set the sensitivity on the mountain motion detection lower so that animals smaller than humans will also trigger an alarm.

The DVR used for this installation supports remote Internet access, so the property owners can login to this system to enjoy this beautiful Colorado mountain view from anywhere in the world. They can also remotely playback recorded video and view any alarm events that were triggered by the motion sensors. This is what it looks like when the cameras are accessed remotely using the iDVR-PRO Viewer app for iPad. The system can also be viewed from iPhone and Android mobile devices. 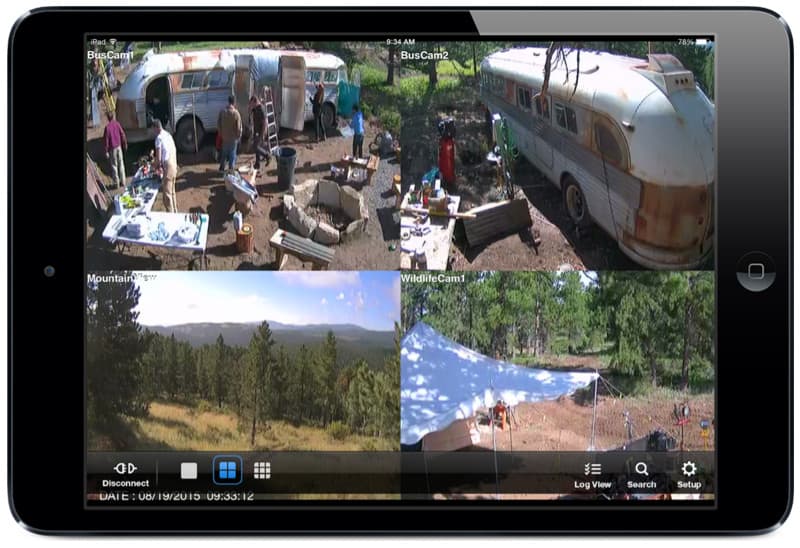 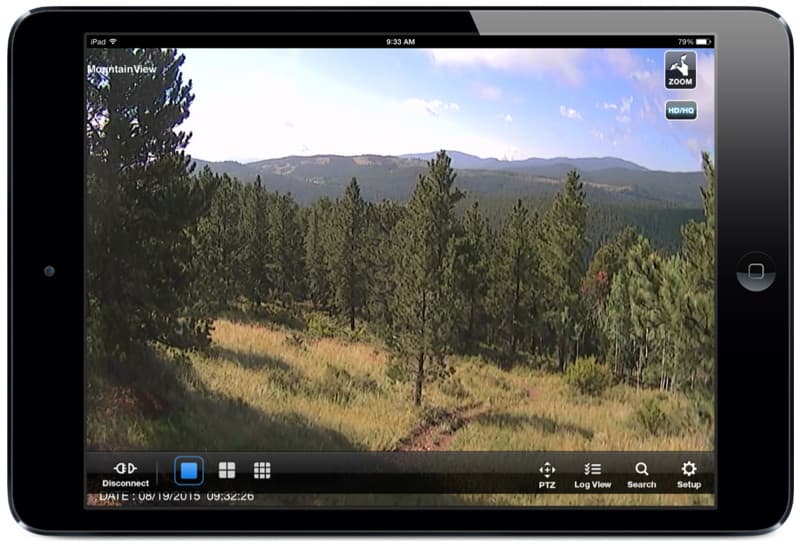 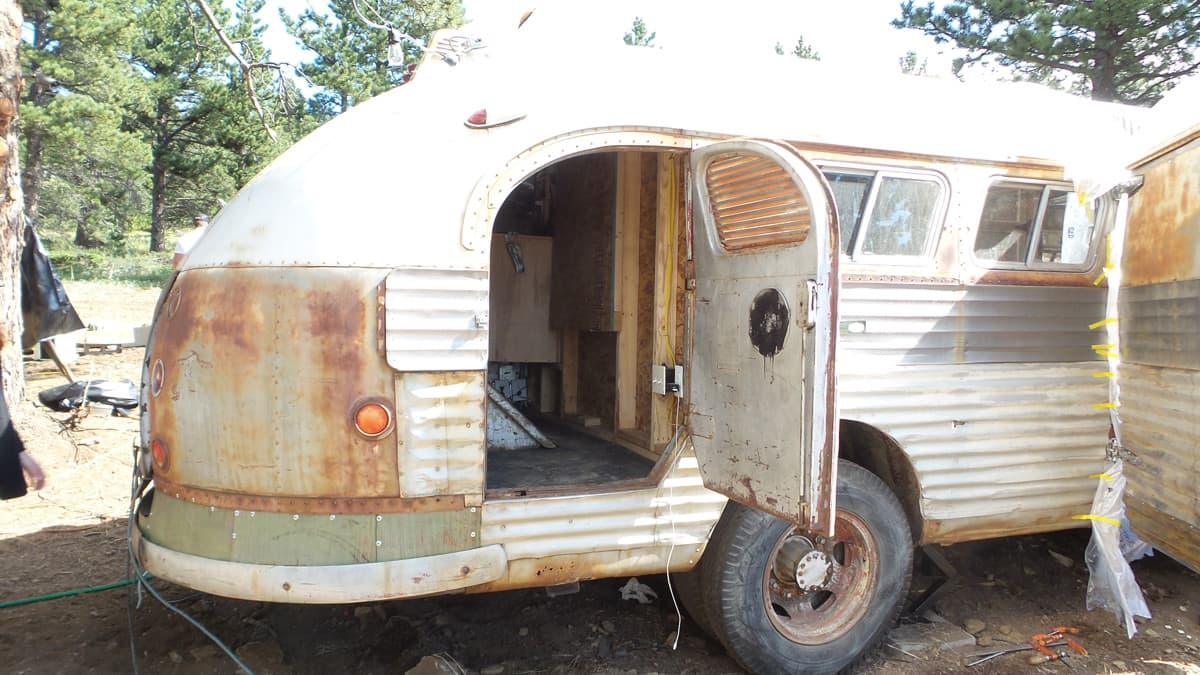 The DVR, network router, and monitor were installed in this back storage compartment of the bus. The property owners plan on mainly using an iPad to access the system even when they are on site. The router has a built-in wireless access point, so they can connect the iPad to the local network when on site. The owners will rarely use the mouse and monitor directly connected to the DVR, however, certain advanced configuration functions are easier to control directly on the DVR, so the monitor and mouse will come in handy from time to time. 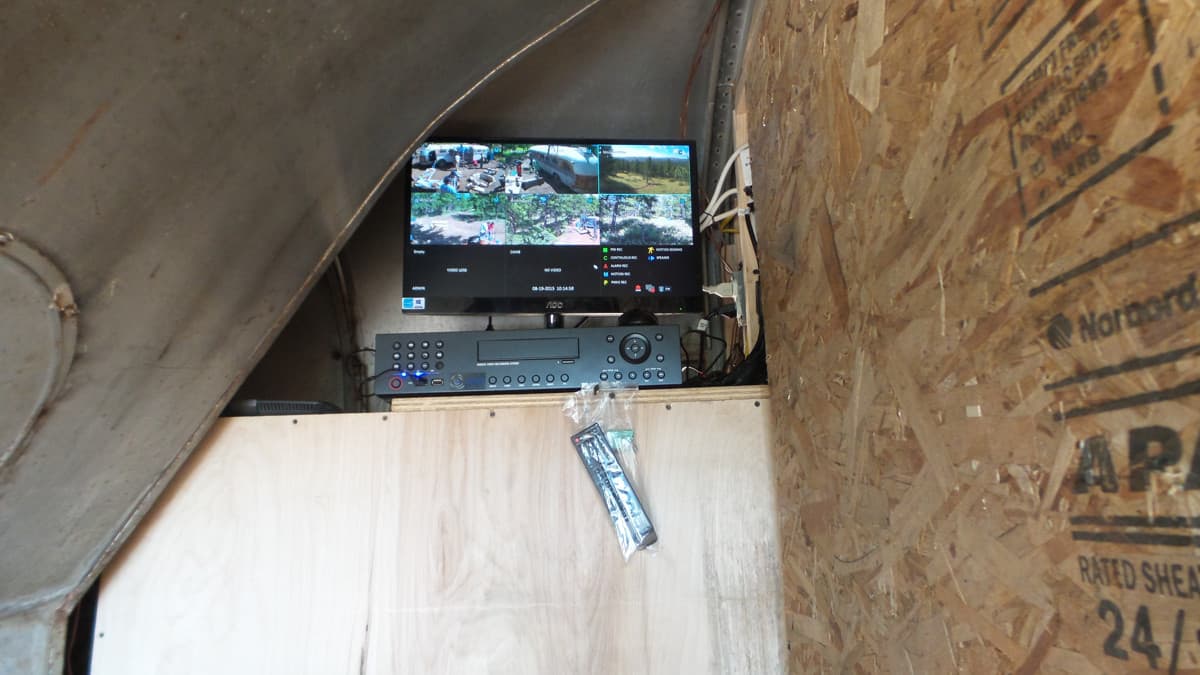 Here is a close-up photo that shows the shelf where the DVR, monitor, and router are in the back compartment of the bus. 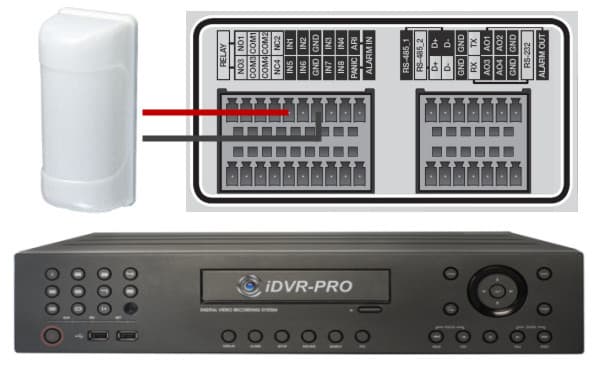 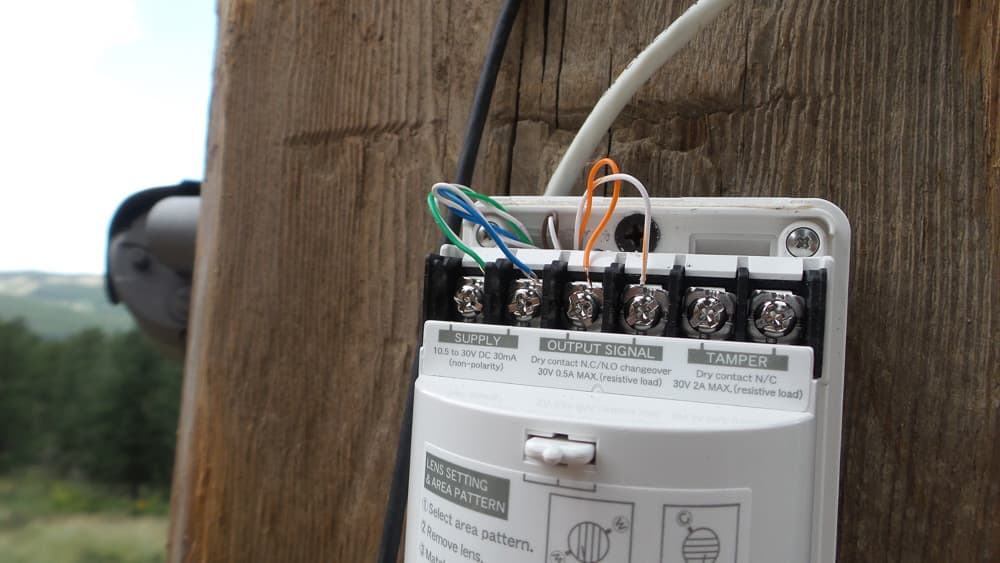 Here is a close-up that shows how to wire the motion sensor using the twisted pairs of cable in a CAT-5.

The DVR was configured to record on all channels when motion was detected by any motion sensor. The DVR was also configured to send an email alert to the property owners whenever an alarm was triggered via a motion detection event. You can see step-by-step instructions on how to setup alarm events on the iDVR-PRO here. 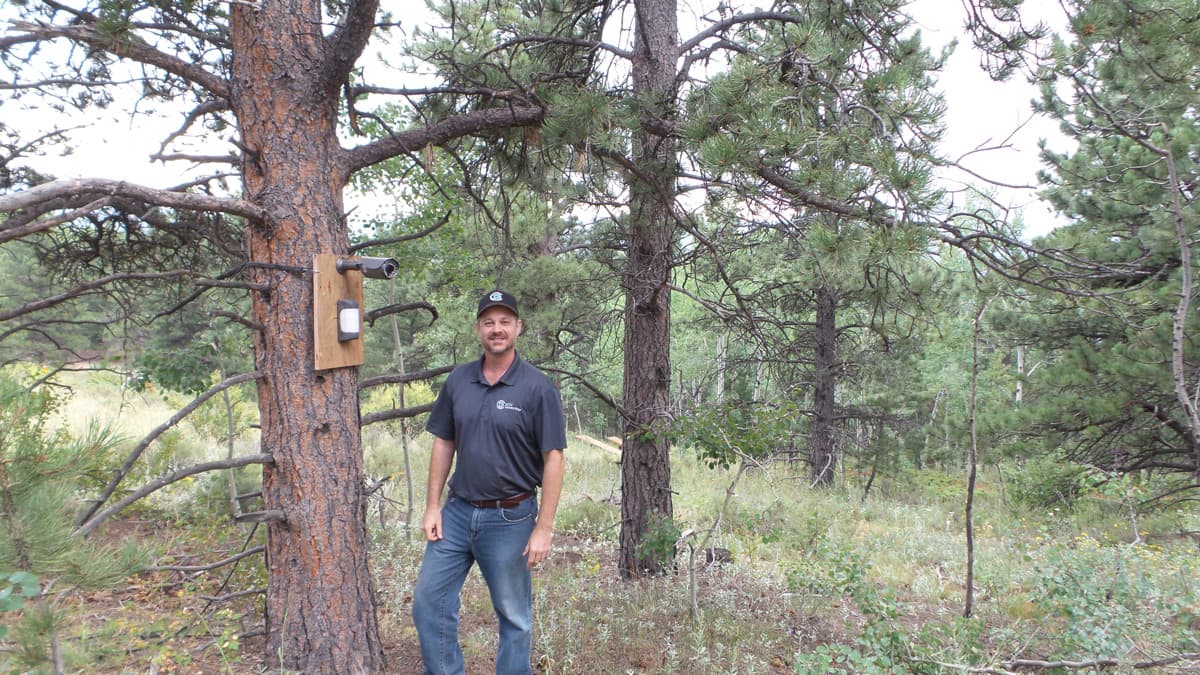 I created a portable wildlife camera for the owners by attaching an HD infrared camera and PIR motion sensor to a piece of wood. I also attached hooks and straps so that the camera could easily be moved to different locations and easily attached to a tree.

While we were working on this project, we found several locations around the site with different types of animal scat. This gave us the idea to create a portable camera that the owners can move to different locations based on where they think there will be animal activity.

Just like the others, this camera and PIR sensor are hard wired back to the DVR. I left about 200 feet of RG59 Siamese cable and CAT-5 cable attached so that the camera could be positioned a good distance away from the bus.

Although we did not capture any animals on video while I was out there (probably because of all the late night construction going on), I hope that the owners will be able to share something online soon. In the mean time, this video surveillance system will help provide security to their mountain retreat when they are not around and it will be fun for them to be able to check in and see their amazing mountain view anytime they want.