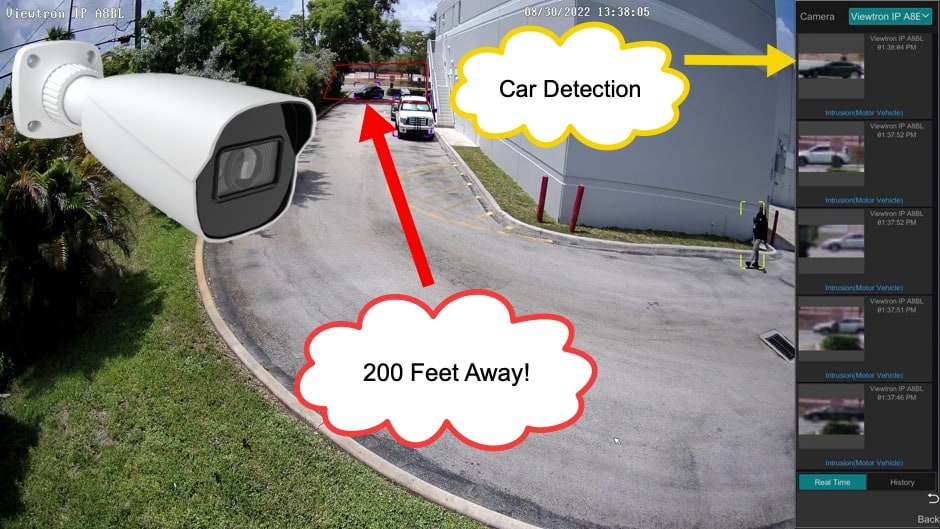 Watch this video to see the long distance car detection testing that I recently performed with a Viewtron 4K AI security camera. Even though this camera has a very wide angle 2.8mm fixed lens, it is still able to detect vehicles reliably at 200 feet away. It was actually detecting vehicles at 300 feet away that were traveling at over 45 MPH, but it was not consistent. At slower speeds, it will probably be reliable at distances greater that 200 feet. I plan to do more testing, including IR night vision testing. 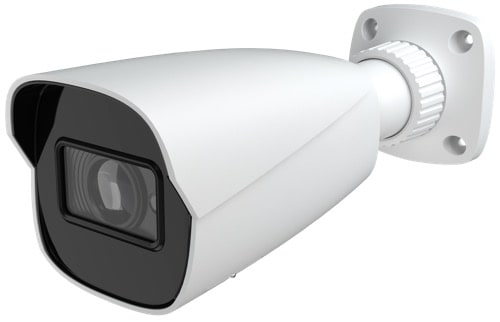 This is the camera that I used in the test, the Viewtron IP-A8BL. We also have this 4K AI dome available. We use this as one of the overview cameras for our LPR system. It just happens to be installed in a great spot for long distance testing.

The camera is connected to a Viewtron IP camera NVR. All of the setup and demo that was performed in the video was captured from the HDMI output of the NVR.

Good morning everyone. Mike from CCTV camera pros here. A customer recently contacted me and he was asking at what distance our 4K AI security cameras can effectively detect cars and trucks. He wanted to install one of our Viewtron AI cameras at his plaza, but where he was able to mount it was quite a distance from where the entrance of the plaza was and that’s where he wanted to detect vehicles. So I set the following test. I’m using our 4K AI bullet camera that you see there behind me, that’s one of our 4k AI cameras. And I set up an intrusion zone out there in the distance to see if it’ll detect cars, basically at the front of our plaza. And something surprising happened. Actually it started detecting vehicles actually on the road in front of our plaza at a greater distance than what I was expecting.

Now, I wouldn’t say it was reliable at that distance, which turned out to be 300 feet, but it was extremely reliable at the distance at the front of our plaza, which is what I wanted to prove, which is about 200 feet. So watch this video demo and see how I set up the intrusion zone for the vehicle detection on the Viewtron NVR that the camera’s connected to, and then watch how it detects vehicles in the distance. And then last, I’ll play back the recorded video to show you how easy it is to jump to those bookmark events.

We’re not going to be detecting humans at that distance. And then in the trigger mode, I’m just going to leave it at recording and snapshot. I press apply when done and then close the window here when done. I’m going to click this button here to enable the AI visualization that opens that window on the right, so that when a vehicle is detected, it’ll show a small thumbnail image of the event. So you see the cars passing by way in the distance are being detected. And those ones in the far lane, that’s 300 feet away. Again, that wasn’t the purpose of the test. I wouldn’t recommend it being used at that distance because it wasn’t always getting vehicles, but in a minute, you’ll see me come around the corner here. Here I come now. That’s 200 feet away and I tested multiple times. It was very reliable. It always detected me coming around the corner there at 200 feet away. And you could see, although we’re not triggering anything based on human detection, you could see the lady walking by and the software detecting her as a human object.

That’ll give me a thumbnail image of all of the vehicle intrusion events that occurred on that camera. And I’m just going to play back the video of me coming around the corner. Again, that was at 200 feet. And when you select a thumbnail, it plays in that small video player in the lower left, but to go full screen, click this playback button that opens the full screen video player. And I’m going to disable that timeline scrubber and go full screen by clicking on that button there. And, again, this is a 4K AI camera. To bring the menu back, I click there and I’m not going to do it here, but you can use that timeline scrubber on the right to jump to other events. It’s very convenient. When I’m done, I can click on this X in the lower right, and then the X in the upper right, and now I’m back at the live security camera view.

Guys, I hope this video’s been helpful. In my testing, these 4K AI cameras can accurately detect vehicles 200 feet away. They do it further than that, but not reliably, especially, in my testing, those vehicles are going like 50 miles per hour. So I wouldn’t rely on it in that situation. A couple things I want to mention before we wrap up. This camera has a 2.8 millimeter fixed lens, which is a super wide angle. So to be able to detect vehicles 200 feet away with a wide lens like that is extremely impressive in my opinion. In addition to the vehicle detection capability, these cameras can also be set up to detect humans. You saw in the video that although the alarm wasn’t triggered, because it wasn’t set up that way, it was detecting that person that was walking across this area during my testing.

Also, they do facial recognition and face detection, and we also have specialized license plate recognition cameras. Actually that camera mounted down low that I use in conjunction with that 4K camera that we just tested, that’s a license plate recognition camera that we use here when trucks and cars enter this back area of our plaza. Anyway, if you want to learn more about Viewtron AI security cameras, you can reach out to me directly anytime. I can be reached at mike@cctvcamerapros.net. I have a whole bunch of additional video demos on the website. If you want to see more video demos and see the latest pricing on these cameras and recorders, please visit www.cctvcamerapros.com/ai.

Thank you for watching