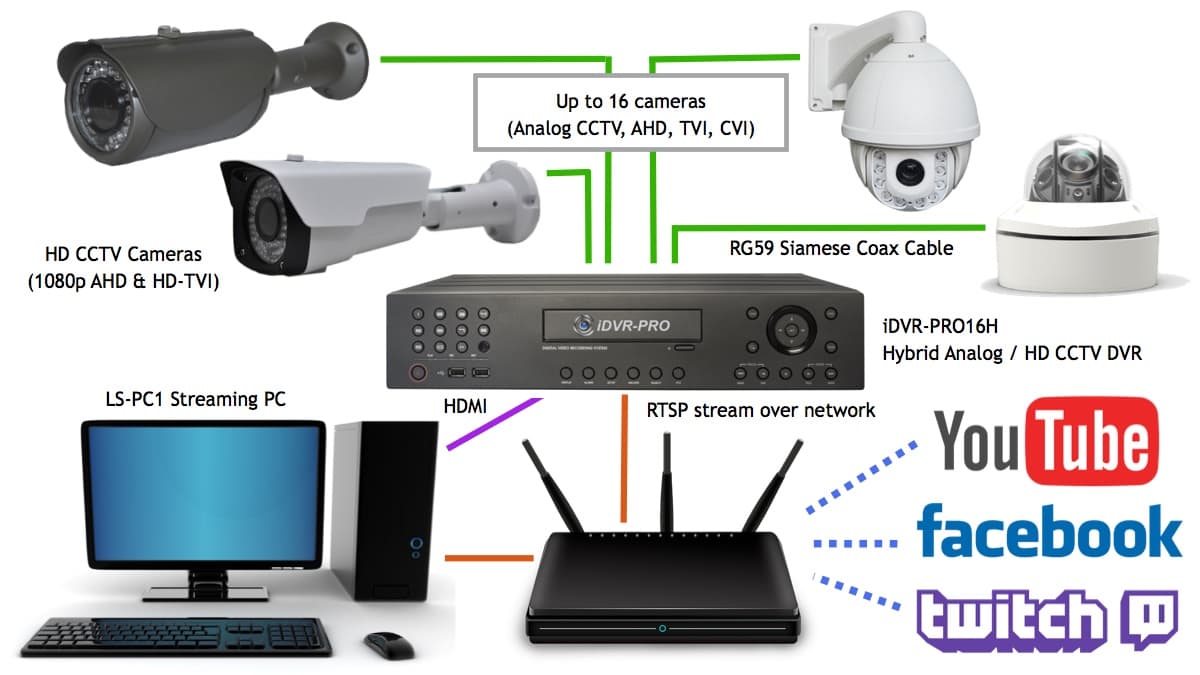 Here are a few ways to use multiple HD CCTV cameras (AHD, HD-TVI, HD-CVI) to Livestream video on Facebook and YouTube. At CCTV Camera Pros, I have helped many customers over the years setup multiple security cameras for live streaming video applications. I have designed video surveillance systems for some customers to serve the dual purpose of provide recorded video security and to be used for online live video streaming for promotional purposes. I have also designed many HD security camera systems exclusively for online live streaming for marketing.

CCTV video multiplexers and some security camera DVRs can be used as a core component in multi-camera video streaming applications. A fairly powerful PC with an HDMI capture card and Open Broadcast software installed are used in conjunction with the CCTV DVR or multiplexer.

June 2020 Update – CCTV Camera Pros recently started supplying this HDMI to USB capture box. It works great and it can be used instead of a BlackMagic capture card. 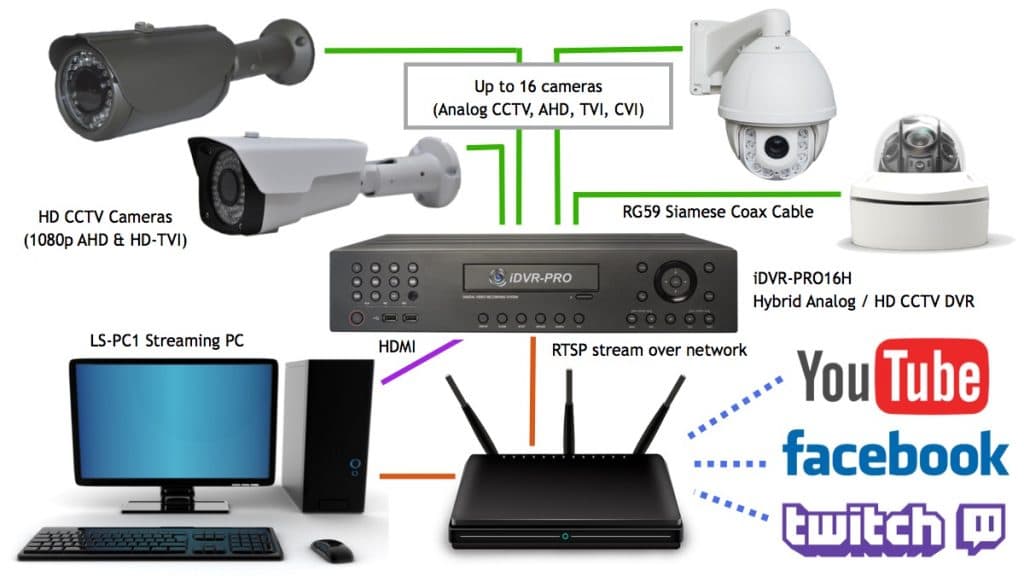 There are two ways to use a CCTV DVR to live stream: 1) via HDMI  2) RTSP streams. I like the HDMI method better because the RTSP streaming method can be delayed and cause some performance problems with the recording operations of the DVR. The setup is almost the same. This method works best on DVRs that have dual monitor / spot monitor support. The spot monitor setup allows you to have a continuous live video display on the HDMI output while the VGA output can be used to administer the DVR using the menu system. The spot monitor output does not display the menu system or actions being performed on the DVR. You can see this in the below video demo.

Instead of using the HDMI output of the DVR, some DVRs give you direct access to the RTSP streams (real time streaming protocol) of each security camera. Open Broadcaster Software can access direct RTSP streams as a media source. If you use the RTSP method, you do not need an HDMI capture card on the PC. The PC and DVR just need to be connected to the same local network. I do not recommend the RTSP method because there can be a slight delay in video and also a performance hit on the DVR when you use RTSP. Also, you do not get the benefit of the automated screen sequence of the spot monitor function of the DVR.

Watch this video to see an archive of a YouTube livestream using an iDVR-PRO CCTV DVR. Please note that this system can also be used to livestream video to Facebook and other streaming platforms as well.

The video also shows how the spot monitor output of the iDVR-PRO can be configured with multiple single and multi-camera views. Please note that this spot monitor function is supported on iDVR-PRO8H and iDVR-PRO16H models. If you have an existing DVR that you want to use and it does not have this dual monitor / spot monitor functionality, you can use a video multiplexer in conjunction with your DVR.

LiveStream Video with Multiple Security Cameras and a Multiplexer 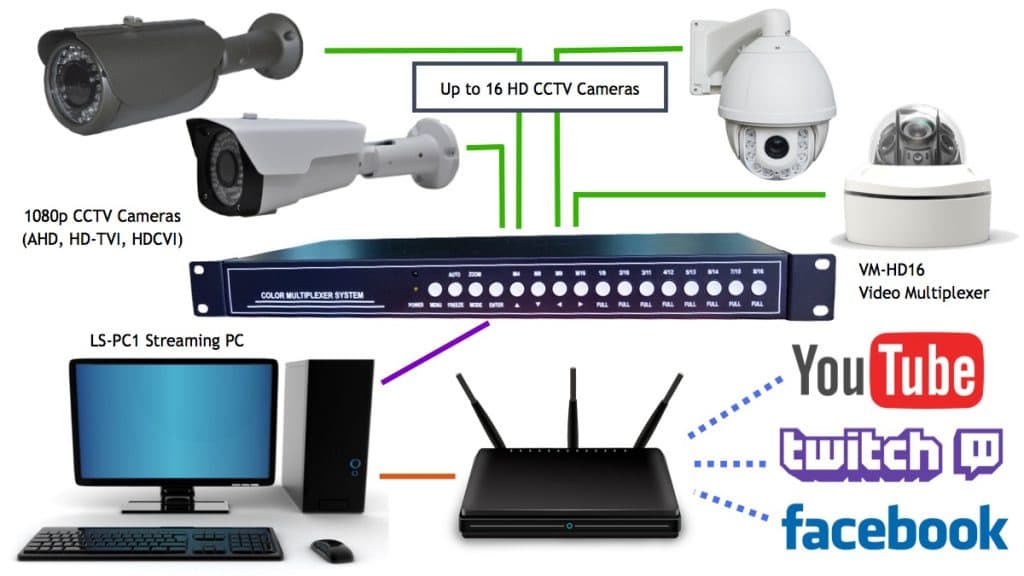 Instead of using a DVR, you can use a CCTV video multiplexer to combine the video signals from multiple cameras into a single view for live streaming. The setup is almost the same. You just replace the DVR with the multiplexer.

Watch the above video to see an archive of a YouTube livestream produced by CCTV Camera Pros using this multi-camera livestream video system which includes a video multiplexer.

Most recently, I have been experimenting with with using my Macbook Pro laptop instead of a Windows based PC as my livestream server. Please check out this new post: How-to Stream Multiple Cameras on YouTube Live. The main reason that I have been testing this is to have a mobile solution that I can more easily take to different locations. 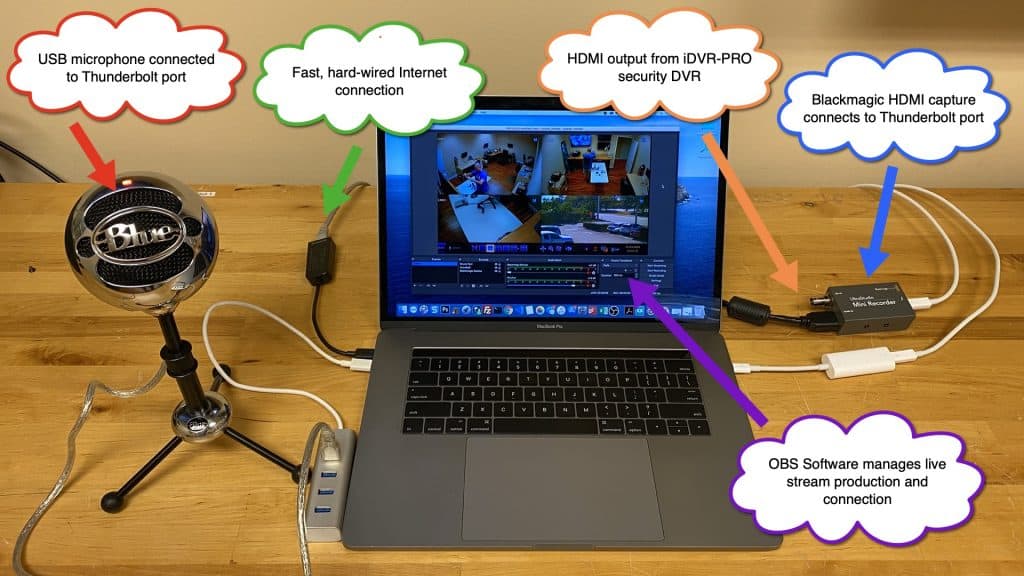 One of the downsides to my Macbook setup is that the external Blackmagic HDMI capture box only supports 1080p @ 30Hz. Our iDVR-PRO DVRs output 1080p @ 60Hz, so I had to do a few video conversions to overcome this problem. The Internal Blackmagic cards that we build streaming servers with, are compatible with 1080p @ 60Hz and even 4K video resolution. The smaller capture box can not work with 4K video.

Important Update! CCTV Camera Pros now recommends our HDMI to USB converter instead of the Blackmagic box. Our HDMI-U3 converter is capable of streaming at 1080p resolutoin.

I have helped many different types of businesses and organizations design live video streaming systems. Here are a few examples.

This article covered a few ways to use video surveillance equipment to live stream video on social media platforms. There are other ways. Which one is best for you depends on your requirements and if you have existing equipment. Please feel free to contact me for a free consultation if you would like my advice.