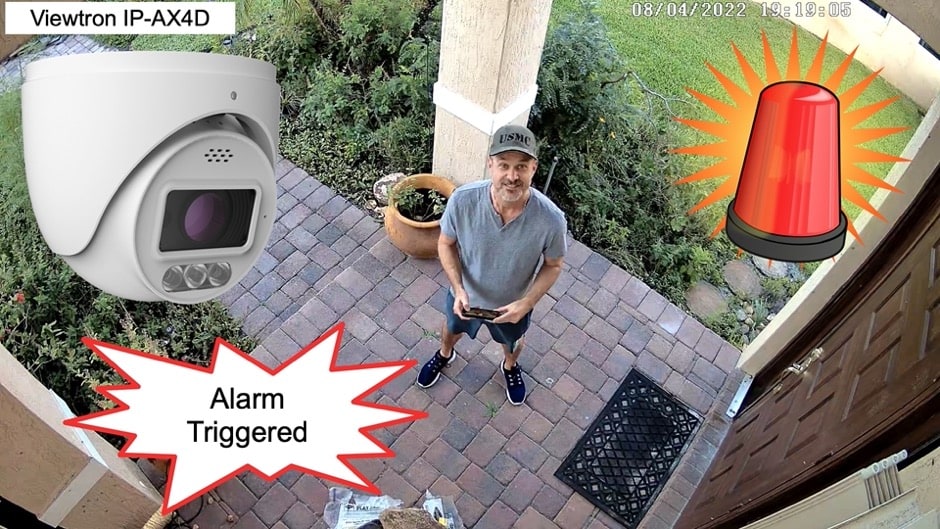 The Viewtron IP-AX4D is an alarm security camera with a built-in active deterrent audio speaker and alarm lights. This network IP camera also has built in AI software that can detect human and vehicle objects. Watch this video demo to see how I setup an intrusion zone at the front door of my house so that when a person is detected late at night a warning message plays on the speaker and the alarm light turns on. 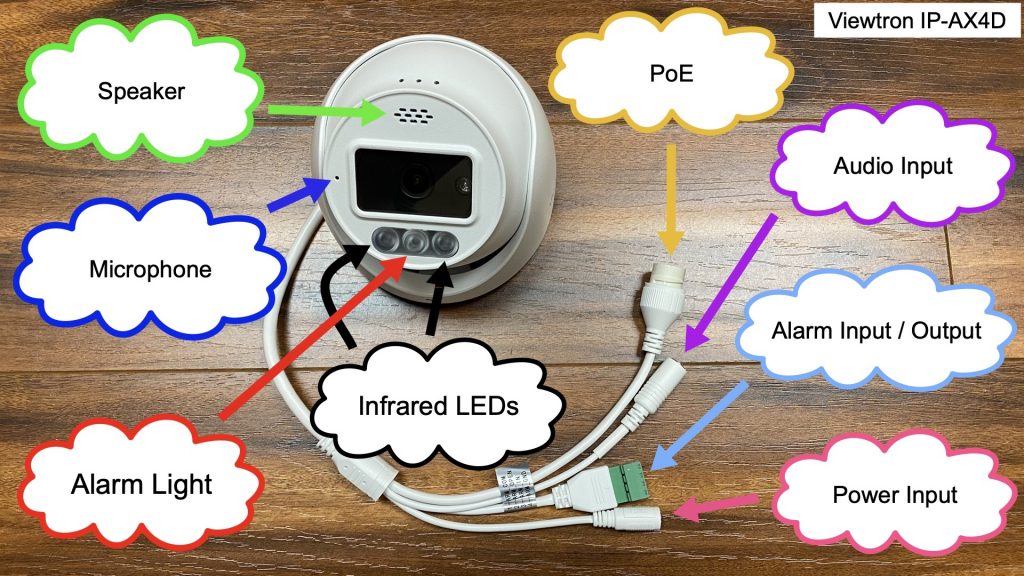 In the above diagram, you can see the locations of this IP camera’s built-in alarm components and more. Here is an explanation.

To record the video surveillance footage and configure the AI software on the camera, the camera was connected to a Viewtron IP camera NVR. 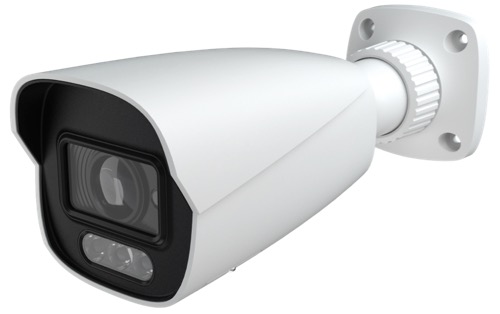 In addition to the dome, CCTV Camera Pros also has this bullet-style alarm camera available. The differences between the dome and bullet camera’s are the bullet does not have a built-in microphone for audio surveillance and 2-way communication. And, the bullet camera has higher powered IR night vision.

You can watch all of our Viewtron AI camera videos here.

So, basically an alarm security camera is a specialized IP camera that has built-in audio and visual alarms that can be triggered automatically when a human or vehicle is detected. And these alarm cameras are also known as active deterrent cameras and active alarm cameras. Let’s take a look at this diagram of our new Viewtron Dome Alarm Camera, and I’ll go over some of the features that it has and how they can be used.

So you’ll notice at the top, it has a speaker. That speaker enables a audio alarm to be triggered when a human or a vehicle is intruding in a certain area. It’s also used in conjunction with the microphone for two-way audio. Our Dome model supports two-way audio.

So for example, if you want to get a push notification to the mobile app so you can log in and see why the alarm was triggered and then interact with the person that’s there via two-way audio communication you can do that. You could see that there’s an alarm light in the middle, and that alarm light has three settings, low, medium, and high. It’s actually a very bright LED and it rotates between blue and red lights when it’s triggered. Again, the alarm light can be triggered automatically based on an alarm event like human detection or car detection, or it could be triggered manually in the app, you could turn the alarm light on or off. And that’s the same thing for the speaker.

The speaker can trigger a siren, or it could be a prerecorded voice message like this is private property, no trespassing. You can actually upload custom recordings to the system. This camera has built-in IR LEDs, so it can see in zero light with its IR night vision. It’s Power over Ethernet, so this connects directly to our Viewtron NVRs. Our Viewtron IP camera NVRs have PoE ports on the back, so you simply run a CAT5e or CAT6 network cable from your recorder to this camera and it provides the connectivity for the video and the power. There’s also an external audio input, so if you want to use an external microphone with this camera you can.

There’s also alarm inputs and outputs, so you can use the alarm input, for example, to connect a magnetic door sensor or an external passive infrared motion detector as an input that can also trigger the alarms on this camera. The alarm output can trigger external devices, such as an external siren or an external light. And last, there’s a power input which is rarely used because again this is PoE, but there are some cases where you need to power this camera via 12 volt DC if you can’t use PoE for some reason. As I mentioned, the alarms can be triggered manually or from the remote apps and Viewtron includes remote apps, mobile apps for iPhone and Android as well as desktop monitoring software for Mac and Windows.

Another thing I want to mention about our Viewtron alarm security cameras, they have built-in AI software. So this is not simply doing video motion detection like traditional cameras do. This is true object detection and with 99.9% accuracy, it knows when a human is detected, or a motor vehicle is detected, or a non-motor vehicle like a bicycle, for example. The AI software is a game changer. If you’ve done video motion detection in an outdoor environment, you know it’s extremely unreliable because the software doesn’t know the difference between a person moving and trees blowing in the wind and it leads to a bunch of false positives and a lot of frustration.

These cameras are IP66 weatherproof rated, so you could use them for indoor or outdoor installation. And we highly recommend using this with our Viewtron IP camera NVRs. We have 8, 16, and 32 channel NVRs and it gets plug-and-play. The network cable runs from the camera straight to the back of the NVR and that provides Power over Ethernet.

CCTV Camera Pros designs custom systems for customers. So we could put together a custom package for you that consists of one or more of our active alarm cameras. You could use some of our AI cameras that are not active alarm cameras. You could use non-AI cameras, and we also have license plate recognition cameras. We can mix and match any of our Viewtron IP cameras and create a custom system for you based on your needs.

If you have any questions about any of this, feel free to reach out to me anytime. I could be reached directly at mike@cctvcamerapros.net. If you want to learn more about our Viewtron alarm security cameras, please visit www.cctvcamerapros.com/alarm.

Thank you for watching!